Former U.S. Army Staff Sgt. Timothy A. Payne was charged with felony weapons possession after police found his van – loaded with guns, ammunition and what police believed to be a bomb – in the parking lot of the North Tonawanda, New York city hall 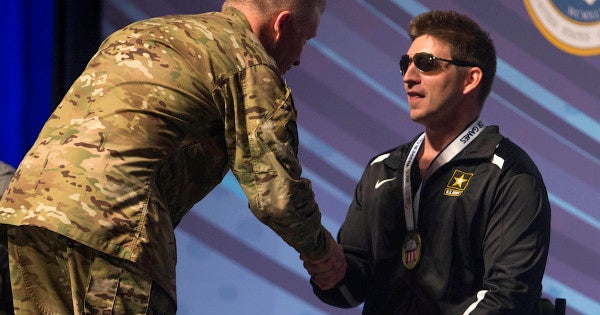 Eight years ago, Timothy A. Payne was an Army sergeant who lost both his legs in a bomb blast in Afghanistan.

Four years ago, he was an honored veteran saluted on the field before a Buffalo Bills game and also spoke at a veterans banquet in Salvatore's Italian Gardens.

Tuesday, Payne was charged with felony weapons possession after police found his van – loaded with guns, ammunition and what police believed to be a bomb – in the parking lot of the North Tonawanda, New York city hall

Payne, 36, a Williamsville North High School graduate who now lives in Raleigh, N.C., was taken to the mental health unit of Niagara Falls Memorial Medical Center for a psychiatric evaluation.

What happened Tuesday came less than two weeks after Payne's website displayed a series of rambling posts about an alleged scandal regarding Smart Start, a preschool program in North Carolina.

“How Jesus Christ showed me the international embezzlement organizations; known as WCSS or Wake County Smart Start or Smart Start or any Smart Start with accompanied name,” the site posted on June 15, one of three posts that day on the topic.

On June 14, the site posted, “stealing from the people is very bad; Jesus Christ is not happy at all. He will not be mocked.”

The rambling post ended, “As a Spartan we say with our shield or on it.”

A May 31 post read, “QMP was misused and our military has been hijacked by Obama era shenanigans. Trust me, I'm a professional. I haven't lost an inch of nerve after losing 36 inches of LEGS, MUSCLE, AND GRIT. Get your settlement from those who overcharged U.S. Citizen tax dollars. Your in debt because of issues like these causing higher interests and percentages. Please share and make sure your veteran or family members with service connected disabilities gets their benefits!”

Mayor Arthur G. Pappas spoke to Payne about the latter's desire to help veterans reintegrate into civilian life. The mayor confirmed the man he spoke to was legless and using a wheelchair.

“Something didn't seem quite right,” Pappas told The Buffalo News Tuesday night. “He was as polite and respectful as he could be. His conversation did wander off on tangents.”

Police Chief Roger R. Zgolak said that an officer's conversation with Payne in City Hall “led him to believe that Payne needed some kind of evaluation.”

Payne told The Buffalo News in November 2015 that he stepped on a 30-pound improvised explosive device near Kandahar, Afghanistan, on July 3, 2011.

“When I got blown up, it felt like someone had taken a chain saw to my pelvis,” he said. “My left side from my leg up to my groin was blown wide open. My left leg was blown off at the knee and my right leg was blown off just below the knee. My left arm was blown open from the elbow all the way to my palm. There were a bunch of holes and burns on my right arm. It was crazy. The blood was pouring out of me like a gallon jug tipped on its side.”

Two buddies performed first aid, and surgeons saved him on the operating table.

The blast occurred two days after Payne killed a Taliban soldier in combat. In a News interview in 2015, he described how he felt after the deadly encounter.

“As soon as I shot and killed a guy in the attack, I could feel this presence,” Payne said. “The thought that played over and over in my head was 'You live by the sword, you die by the sword.' I didn't really believe in anything, to be honest with you. So I was like questioning my thoughts. I was like, 'Is this some sort of medieval or Dark Ages thing? Why am I thinking about a sword?'

“The reply back was like 'no.' Then the second thought I had was, 'Is this God?' And immediately after that there was a 'yes.' I thought, 'Oh, don't kill me. I'm doing my job.' The reply back was 'It doesn't matter. You've killed your last man.' I said, 'Please don't kill me.' Then I said, 'Shoot me.' Then I said, 'Take one of my legs. Take both of my legs. If you let me live, I'll read the word and spread the word.' “

Payne recounted the visions of heaven and hell he saw while in a drug-induced coma for two weeks after being injured.

“It was like I knew the difference between my dreams and the visions while I was in the coma,” he told The News.

“Dreams are random and kind of weird,” Payne recounted during his interview several years ago. “I'd be in a dream and then I'd be pulled down into these catacombs, like a cave. That was the vision part. It was like a spiraling-down type of thing. The first one I had was when the doctors put me out in the emergency room in Afghanistan after I told them my name and what had happened to me.”

But later, there was a brighter vision.

“I was going up so fast the stars looked like streaks of light. Then finally I looked up and saw a bright light and the next thing I knew I was up in a different world,” Payne said.

He told The News that in the vision, he wore a battle uniform and three other men were present. He says a fierce battle was being fought nearby and he urged the men to fight with him. But they told him he was not supposed to be with them.

“They said to me, 'Don't you remember? You got injured. You have to go back to Walter Reed [Army Medical Center]. You made a bargain. You gotta go back,' ” Payne said.

After that, he woke up.

For years, Payne seemed to be the model of a recovering veteran.

He received a lifetime achievement award from President Obama, wrote two books and won a swimming gold medal in the Invictus Games, created by Britain's Prince Harry for wounded soldiers.

In 2015, according to Raleigh's WTVD-TV, he received a custom-built home from Operation: Coming Home, an organization that helps veterans.

But in 2017, another Raleigh station, WRAL-TV, reported that Payne had struggled with post-traumatic stress disorder and medication addiction.

He set up Chosen Leadership LLC, whose goal, according to its website, was “building a better tomorrow one person at a time, in the name of Jesus Christ.”

But the most recent posts on the site talk about a local scandal regarding alleged embezzlement from a North Carolina preschool program called Smart Start.