"This is not something that you typically think is going to happen or experience on an airplane." 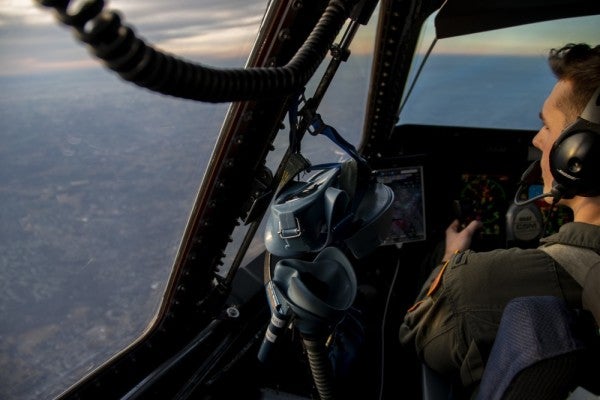 The Air Force's largest aircraft, the C-5M Super Galaxy, was carrying 68 passengers from Barksdale Air Force Base, Louisiana, the evening of Jan. 17 when a medical emergency caused the plane to be diverted.

The plane was en route to Rota, Spain, when less than a half hour into the flight, a passenger lost consciousness. Other passengers alerted the crew of a possible seizure, and Master Sgt. Josh Cutrer responded first. He cleared out the crowded seating area to keep the passenger comfortable and stable.

“The biggest thing was to keep him safe,” Cutrer said. As the passenger regained consciousness, he seemed dazed, couldn't remember much before passing out and told Cutrer that this hadn't happened to him before. He wanted to continue flying, but Cutrer was already in communication with aircraft commander Capt. Geoff Howard.

“He obviously had something going on that was medical,” Cutrer said. “I didn't feel like it was the right call to continue our flight.”

The pilots communicated with air traffic control and identified Memphis International Airport as a good fit. It was only a few miles away, provided 24/7 medical care and could accommodate their large aircraft, Howard explained.

“We were extremely heavy. We were about 770,000 pounds when we were landing, so we needed an extremely long runway,” he said.

First pilot Lt. Eli Parsch joined Howard in the cockpit as they prepared the plane for a quick landing.

“There's a lot of work in between the plane landing and when we're up at cruise,” Parsch said. “So, we're basically trying to manage all the tasks that we have to achieve and make sure all the crewmembers are also handling all the things that they have to do while managing this emergency issue.”

The pilots landed the C-5 without any issues and immediately connected the passenger with medical personnel at the airport.

While the passenger was treated, the plane was delayed a couple hours in Memphis, and then it continued to Dover. Flight engineers were dealing with an aircraft problem before leaving Barksdale and had already decided to divert to Dover before continuing to Spain.

Flight engineer Tech Sgt. Alexander Barnes typically sits behind the pilots and operates the aircraft systems. He was addressing the aircraft problem when the medical emergency arose.

“It was not like we could completely ignore either one of them,” he said. “There was juggling involved.”

In addition to the aircraft problem, an indicator went off in the cockpit that one of the doors to the outside of the plane could be open. This could cause structural damage and pressurization issues, Howard said.

The plane was ascending to 18,000 feet when the indicator went off. The pilots leveled the plane and informed air traffic control. Procedure required them to descend below 10,000 feet, depressurize the airplane and get one of the flight engineers in a harness to inspect all the doors leading out of the plane.

During this process, the passenger lost consciousness.

“From that point on, the issues of the aircraft were really put to the side,” Howard said. “It was just all about taking care of the passenger.”

For most of the crew, this was the first time they had experienced a medical emergency mid-flight.

“This is not something that you typically think is going to happen or experience on an airplane. We deal with a lot of emergencies as far as pertaining to the airplane in flight, but not so much with the passengers,” Cutrer said.

All Air Force members receive basic medical training, he said. Several crew members said their training and teamwork allowed them to finish their mission and fly their passengers to Spain the next day.

“Our training is exceptional, our teamwork is outstanding and we have just the best character airmen that make up our United States Air Force,” Howard said. “And when all three of those things come together, they act as a pillar that carried us through to safety that night.”