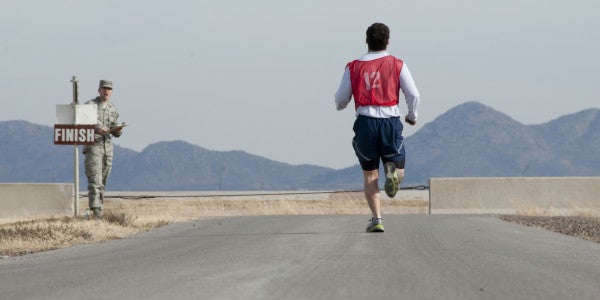 The Air Force says dozens of airmen have failed physical training tests in recent years due to inaccurate track distances.

All bases should measure their running tracks by Oct. 31 to prevent false test scores, the service announced on Thursday.

Nearly 60 airmen at Goodfellow Air Force Base, Texas, and Hanscom Air Force Base, Massachusetts, received inaccurate run scores because of the problem, the service said. The test requires airmen to complete a timed 1.5-mile run or a two-kilometer walk if they are exempt from the run.

Officials at Goodfellow determined the outdoor running course was 85 feet longer than required, which may have caused 18 airmen stationed at the base between 2010 and 2016 to fail the fitness assessment, the announcement said. The track was last measured in 2010.

At Hanscom, the track was found to be 360 feet longer than it should be, likely causing 41 airmen stationed there between 2008 and 2016 to fail. The track was last measured in 2008.

“All airmen who should have passed were notified,” Brzozowske said in an email.

“If still on active duty, their fitness scores were adjusted to the correct passing score. If there were any personnel actions taken resulting from the inaccurate failures, airmen should work with their chain of command, Force Support Squadron and legal office, and potentially the Air Force Personnel Center to correct records,” she wrote.

The service's inspector general also plans to include the PT program “as an Air Force inspection requirement on future wing unit effectiveness inspections,” the announcement said.

In addition, each time a base redesigns or modifies a running track, it must measure it as a precaution, it said.