At least 50 people gathered at a Suffolk veteran’s cemetery on a hot Thursday afternoon to honor a man they... 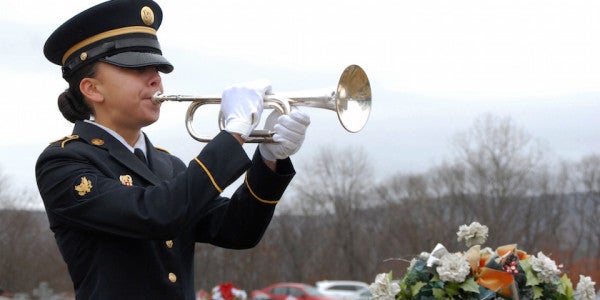 At least 50 people gathered at a Suffolk veteran’s cemetery on a hot Thursday afternoon to honor a man they hardly knew.

But Eldridge Byrd was no stranger – not really. When you’ve served your country, they said, you always have a family.

“Everybody deserves to be sent off respectfully, especially service members,” said Erika Bradley, a Navy wife who had learned of the funeral just an hour before.

Her 4-year-old daughter, Grace, stood at her side in a patriotic sundress of red, white and blue. Bradley said she “bawled” when taps sounded.

Hers weren’t the only tears.

Eldridge Byrd, 92, died in June at James River Convalescent and Rehabilitation Center in Newport News. Because he had no identifiable living relatives, his body came under the care of the Newport News Sheriff’s Office.

Capt. Shonda Whitfield is in charge of unclaimed remains; her goal is to see they get proper burials.

It took some doing, but with the help of Susan Ulrich at Albert G. Horton Jr. Memorial Veterans Cemetery in Suffolk, Whitfield was able to determine Byrd served in the Army as a private from March 1945 to March 1946, though any other military records that might have shed light on where he served were destroyed in a 1973 fire at the National Personnel Records Center in St. Louis.

Byrd was laid to rest with military honors, which included members of the Patriot Guard Riders. The folded American flag was presented to Patrick Biron, who considered Byrd family, though they are not related.

Biron said they met at James River Convalescent when Biron started visiting his father-in-law there around 2002. They struck up a friendship, Biron said.

Biron said Byrd was a gentle, quiet man. He spoke of a son and sister, Biron said, but both had died.

“I wish we could’ve met his family,” Biron said. Byrd was Biron’s guest at Thanksgiving and Christmas, and despite the nursing home’s objections, Biron delivered Byrd his beloved chili dogs with mustard and onion.

Byrd kept mostly to himself but “lit up” when Biron’s brother, Kenny, entered the room. The two bonded over football, Biron said, with Byrd rooting for the Dallas Cowboys and Kenny Biron rooting for the Washington Redskins.

“If you served, you’re my brother, you’re my sister,” said Morgan, who spent more than two decades in the Army.

No matter how small or how large a part Byrd played during his service so many years ago, Morgan said, he “dared to take the oath.” The same one so many others seated and standing nearby had taken, he noted.

“But look how many of us are claiming him today.”