The heavily armed fighters peered out of a broken second-story window at their outpost in a crumbling house on the... 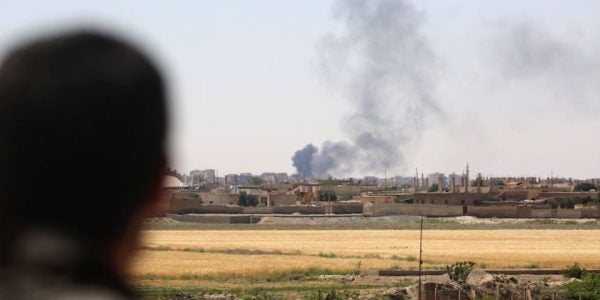 The heavily armed fighters peered out of a broken second-story window at their outpost in a crumbling house on the western edge of this shell-shocked city, where the Islamic State is fighting a furious battle to hold on to the capital of its self-declared caliphate.

They ducked to avoid snipers camped in nearby high-rise apartments. Armed drones hovered nearby. Just before 2 p.m. came the crack of sniper fire.

“That’s our guy,” Kevin Howard, 28, said as he rose and prepared to return fire.

Howard is not one of the hundreds of U.S. troops deployed in Syria. The U.S. Marine Corps veteran from San Francisco came here as a volunteer, part of a small group of freelance recruits who have traveled to Syria from the U.S., Europe and other regions to help local forces fight the Islamic State.

Americans have a history of volunteering to fight overseas. The Abraham Lincoln Brigade fought fascists in the Spanish Civil War; U.S. pilots flew for Britain and China before World War II; and U.S. citizens have served in the Israel Defense Forces.

The war in Syria and Iraq has been more problematic. Americans who try to travel there to fight alongside the Islamic State face immediate arrest, and many have been detained at U.S. airports as they prepared to respond to the militant group’s global call to arms. Those who volunteer to fight the jihadis with U.S.-allied Kurdish and Syrian militias, though the State Department advises against it, face no such legal consequences.

Nicholas Warden died as a volunteer fighting alongside the Kurdish People’s Protection Units, known as the YPG, outside of Raqqa, Syria, earlier in July 2017.

Several hundred such volunteers have arrived since the Syrian civil war began six years ago, according to local estimates, and several dozen remain.

Some, such as Howard, are military veterans who served in the Middle East and believed they had left a job unfinished. Others are young people drawn to the plight of the Kurdish rebels, or by the powerful lure of combat in a faraway land.

In recent days, as the battle for Raqqa has turned into a violent death spiral for the Islamic State, three of the volunteers have died.

“Everyone is really torn up over losing those three guys, especially all at once. And they were only a few months out of the (Kurdish training) academy,” said Lucas Chapman, who returned to Washington this year after fighting alongside the Kurdish People’s Protection Units, or YPG, the largest force fighting in eastern Syria.

Warden had served with the U.S. Army in Afghanistan and with the French Foreign Legion, Chapman said, and came to fight the Islamic State in February because of the terrorist attacks in San Bernardino and Orlando, Fla.

Grodt, who graduated from Monte Vista School Independent Learning Academy in Simi Valley and studied philosophy at Moorpark College, was an idealist, friends and family said.

A few years ago, he had hitchhiked cross-country to New York to join Occupy Wall Street protests and proposed to a young woman he met there in Zuccotti Park, the Occupy movement’s base. The couple settled in New York and had a 4-year-old daughter.

In April, he traveled to Syria to join the YPG, after researching the group’s cause and meeting other volunteers who had returned to the U.S. He didn’t consider joining the U.S. military because he wasn’t sure it was getting the job done, according to his mother, Tammy Grodt of Simi Valley.

“My reasons for joining the YPG was to help the Kurdish people in their struggle for autonomy in Syria and elsewhere and also to do my best to help fight Daesh and help create a more secure world,” Robert Grodt said, using an Arabic acronym for the Islamic State in one of a series of videos he made from Syria, this one as he sat in uniform in a field, clutching his rifle.

He was killed by a mine explosion July 6, his body taken to a “martyrs’ center” at a YPG cemetery in Qamishli, his mother was told.

Tammy Grodt, a nurse and mother of six, learned of her son’s death July 8. “The State Department is working to bring him home to us,” she said.

She said her son had seen other volunteers return home unscathed and “truly counted on coming back.” He last called home from Syria on May 11, chattering excitedly about his battle buddies and promising to return in August.

“Many may question why he chose a task that seemed so far from being one that could be successfully accomplished,” she said. “He had a lot of passion and dedication and believed with his effort and enthusiasm, working with others just as dedicated, he could accomplish anything he set his mind to.”

Others have had similar aims.

Arriving in Raqqa recently from northeastern Syria, Swedish volunteer Olivia Mefras said she had left to join the Kurdish Women’s Protection Units without telling her parents.

“They’re not that happy about it,” said Mefras, 22. The high school graduate said she had rudimentary firearms training and was eager to head to the front line.

“We all want to do something meaningful. We know it doesn’t make a difference to the people here — they would fight anyway. But it makes a difference to us in our lives,” she said.

Daman Frat, a YPG commander stationed east of Raqqa, said several foreign volunteers were fighting alongside his units in remote areas outside the city, most of whom had served previously in U.S. or European military units and wanted to be in the thick of the fight.

“They know what Daesh means, and that if they control the area, they will go to Europe more” to mount new attacks, he said.

Syrian Democratic Forces fighters, including Western volunteers, are paid about $100 to $250 a month, depending on which forces they serve with and for how long.

U.S. coalition support for the SDF does not include those salaries, said Maj. Josh T. Jacques, a U.S. Central Command spokesman, who described the fighters as “the coalition’s local ground force partner in the fight against ISIS in northern Syria.”