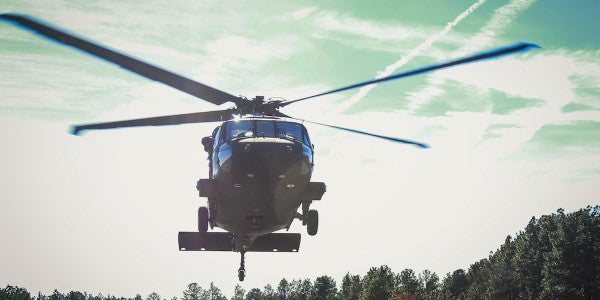 There were no injuries as a result of the crash, which the Federal Aviation Administration said was the first in U.S. history between an aircraft and a drone.

The helicopter and its crew are part of a contingent of soldiers from the 82nd Combat Aviation Brigade, 82nd Airborne Division serving in New York in support of the United Nations General Assembly, which brought world leaders to the city.

A spokesman for the 82nd Airborne Division, Lt. Col. Joe Buccino, said the helicopter sustained minor damage to a window and a rotor blade when a hobby drone, described as a quadcopter, struck the helicopter at about 7:30 p.m.

The incident is under investigation by authorities in New York.

New York media reported the helicopter was flying at about 500 feet over a residential area when it was struck. FAA guidelines require drones to fly at or below 400 feet. Drones are also prohibited to fly outside of parks in New York City.

The helicopter landed safely at a New Jersey airfield after the collision, Buccino said.

“Our paratroopers are well-trained and well-led,” he said. “They responded immediately and appropriately to ensure the safety of the crew and the completion of the mission.”

Buccino said a team is on its way to New York with the equipment needed to repair the helicopter. It’s expected to be fixed within 24 hours.

Buccino said no soldiers were injured during the incident.

The soldiers in New York are part of the 2nd Assault Helicopter Battalion. They have been there since Sept. 17.

Military editor Drew Brooks can be reached at dbrooks@fayobserver.com or 486-3567.