The Department of Defense has released video that it says shows a drone strike destroying a Russian-made T-72 battle tank... 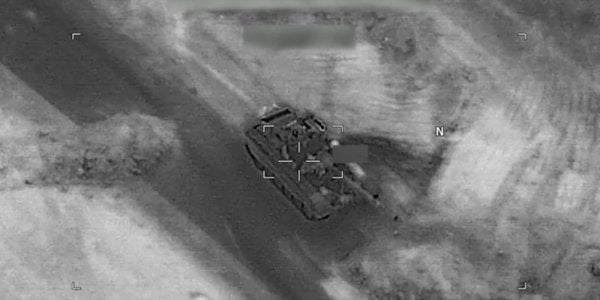 The Department of Defense has released video that it says shows a drone strike destroying a Russian-made T-72 battle tank in Syria.

The Pentagon told Business Insider on Tuesday that “the tank had been maneuvering with coordinated indirect fire on a defensive position occupied by Syrian Democratic Forces and Coalition advisors.”

Other outlets have reported that the “coalition advisors” were U.S. special operations forces which are known to train, equip, and fight alongside the SDF. The Pentagon said no U.S. or SDF forces were killed by the tank.

Widespread reports suggest Russian military contractors drove the tank and had been behind multiple attacks on the US and its allies in Syria.

Bloomberg recently reported that one massive battle saw US airstrikes, rockets, and artillery kill upwards of 200 Russians as they defended an SDF position.