Lives could have been saved if the Coast Guard had followed safety recommendations from 18 years ago, officials said. 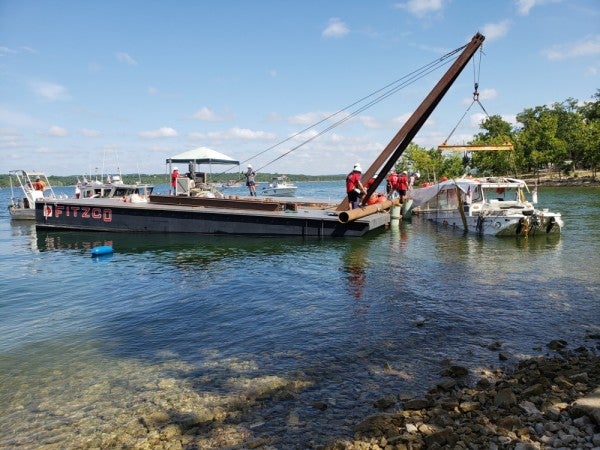 KANSAS CITY, Mo. — Investigators with the National Transportation Safety Board said Tuesday that lives could have been saved when a duck boat capsized in a thunderstorm on Table Rock Lake if the U.S. Coast Guard had followed safety recommendations from 18 years ago.

NTSB investigators discussed with board members their nearly two-year investigation into a 2018 disaster near Branson when a Ride the Ducks tour vessel sank, killing 17 of the 31 people on board.

The sightseeing tour started on Table Rock Lake just ahead of the arrival of a severe thunderstorm on July 19, 2018. The thunderstorm barreled down on the lake with winds exceeding 70 miles per hour, more than twice what the duck boat was supposed to be able to handle.

The NTSB in 2002 issued safety recommendations to the U.S. Coast Guard for duck boats — World War II-era vehicles that can travel on land and on water — that included removing overhead canopies and increasing reserve buoyancy on the boats. Those recommendations came after a duck boat called Miss Majestic sank on a lake in Arkansas in 1999, killing 13 people.

The Coast Guard did not adopt those recommendations, the NTSB said.

“Staff believes (Coast Guard regulation) NVIC 101 did not effectively address NTSB’s 2002 recommending the removal of … fixed canopies and likely increased the number of fatalities,” said Michael Karr, who investigates survival factors for the NTSB, during a video conference with NTSB board members Tuesday morning.

“There were many similarities between that sinking and the one that we are considering today,” said NTSB chairman Robert Sumwalt. “The NTSB issued several recommendations in connection to the sinking of the Miss Majestic that were never acceptably acted upon.”

The NTSB investigation also found that Stretch Duck 7, the name of the boat that sank in 2018, had a spring-loaded forward hatch, which allowed water to rapidly enter the engine compartment of the boat as its captain tried to steer the boat to the lake’s exit ramp.

By comparison, Stretch Duck 54, another Ride the Ducks boat that was out on the water when the storm arrived at Table Rock Lake but made it safely to the exist ramp, was newer, had a stronger front hatch that kept water out of the engine compartment and had better reserve buoyancy.

Stretch Duck 7 also had its side curtains down when the storm arrived, which along with the overhead canopy blocked passengers from escaping Stretch Duck 7 as it sank.

A federal grand jury indicted McKee, 51, on charges of misconduct and negligence for his handling of Stretch Duck 7.