Rep. Duncan Hunter’s failed visit to US Navy base in Italy was bogus cover for campaign-funded family vacation, judge rules

A federal judge in the criminal case against Rep. Duncan Hunter ruled in an order filed Tuesday that a campaign-funded... 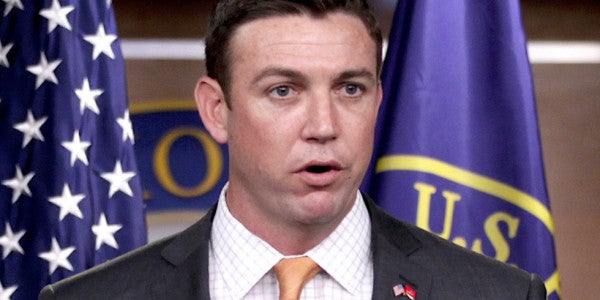 A federal judge in the criminal case against Rep. Duncan Hunter ruled in an order filed Tuesday that a campaign-funded trip Hunter's family took to Italy was not legally-protected legislative activity, and neither were efforts to control political damage from a probe into his campaign spending.

Judge Thomas J. Whelan listed the findings in the three-page order memorializing his ruling Monday to deny some of the lawmaker's key motions to dismiss part or all of a 60-count indictment against him for allegedly using more than $250,000 in campaign money for personal purposes including getaways with girlfriends, dental work, private school tuition, video games and more.

Hunter, R-Alpine and his wife and former campaign manager, Margaret, were indicted Aug. 21, 2018. Both originally pleaded not guilty to the charges.

Last month, Margaret agreed to plead guilty to one count of conspiracy that named Duncan Hunter as her co-conspirator.

In motions filed late last month, Hunter argued that the charges should be dismissed because some of the government's evidence was legislative material and activity protected by the U.S. Constitution. He specifically named evidence related to campaign spending for a trip to Italy in 2015 and efforts that members of Hunter's staff made in 2016 to plan a public rebuttal for release when the Office of Congressional Ethics disclosed the results of its probe into Hunter's political spending.

Whelan wrote in his order Tuesday that based on the law and a preponderance of evidence, the court had determined the arguments were “wholly without merit.”

Included in the order were findings that addressed Hunter's argument that the family trip to Italy was a constitutionally-protected legislative activity based on Hunter's failed attempt to arrange a visit to a U.S. Navy base near Naples while his family was in the area.

“The proposed November 2015 visit to a base in or around Naples, Italy, in conjunction with the Hunter family vacation was, at best, a pre-legislative or fact-finding investigation by an individual member of Congress,” Whelan wrote in his order. “On its face, the purpose of the proposed visit is ambiguous, but evidence of the content, purpose, and motives for the proposal demonstrates that it was designed primarily to provide a pretext for the family vacation and not for any legislative purpose.”

Whelan's order also included findings that addressed Hunter's argument the constitutional protections applied to evidence related to efforts Hunter's official staff made to prepare a public response for release when the Office of Congressional Ethics disclosed the results of a probe into Hunter's campaign spending.

“The OCE Report of August 26, 2016, which Hunter played no role in preparing, is not a legislative act of Hunter's and was not related to the process of enacting legislation,” Whelan wrote in the order.

Whelan's order went on to say that the response and associated discussions between Hunter and his staff “was designed to mitigate negative effects of the public release of the report, and was, like a news release, political in nature rather than legislative.”

Hunter's trial is scheduled for Sept. 10, according to court records. His office did not respond to a request for comment.