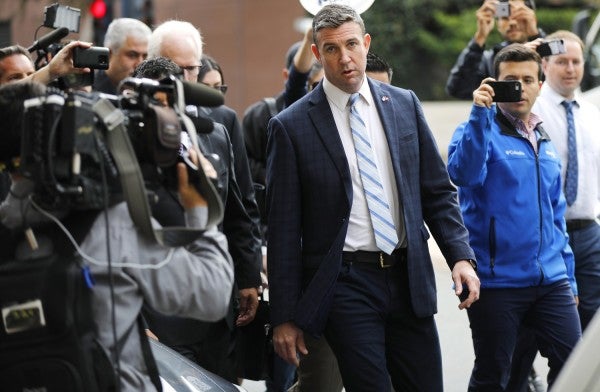 Even as former Rep. Duncan Hunter insisted publicly that he never mishandled campaign donations — allegations he later admitted to in U.S. District Court— the Republican from Alpine was deliberately hiding his criminal behavior, federal prosecutors said in a filing Tuesday.

The disgraced congressman, who in January resigned the 50th District seat he held for almost six terms, knowingly used political contributions to support a lavish lifestyle, including fancy meals, trips with girlfriends and even paying for his children's private-school tuition, the filing states.

At the same time Hunter told national television audiences and local supporters that he did nothing wrong, claiming he was the victim of a witch hunt cooked up by his political enemies, hundreds of pages of evidence made public Tuesday show the congressman was actively obfuscating his role in the campaign finance scandal.

“Rather than admit his guilt and resign his seat in April 2016, when originally questioned, or even in August 2018, when originally charged, Hunter chose to mislead the more than 700,000 people who reside in the 50th congressional district,” the filing states.

“As we now know, Hunter lied to the people about his guilt. Not once but countless times,” the filing adds. “As a result of his duplicity, the voters were duped of their right to representation in Congress — representation they are denied to this day.”

The assertions were included in a lengthy sentencing memo to Judge Thomas J. Whelan, who is scheduled to decide next Tuesday what penalty Hunter will receive in the wake of his guilty plea to a single count of conspiracy late last year.

Prosecutors agreed to a sentencing range of between eight and 14 months in federal prison, and argued in the court filing that the former lawmaker should spend 14 months in custody.

The defense's sentencing recommendation was not immediately available Tuesday, but the Hunter team is expected to seek a lesser term in federal custody — or no prison time whatever.

The government's 87-page filing was accompanied by hundreds of pages of exhibits and other attachments that spell out a years-long pattern of relying on political contributions to pay routine household bills and to finance resort stays and other extravagant spending.

The 300-plus pages from prosecutors came as Hunter's defense lawyers are trying for a second time to convince Whelan to dismiss the case against the congressman, or at least recuse two prosecutors in the case who had attended a fundraiser for Hillary Clinton in 2015.

Defense attorney Paul Pfingst argued in a motion filed last week that Hunter was renewing his request for recusal or dismissal, which Whelan denied in July.

In that filing, Pfingst argued that newly obtained emails about the fundraiser deepened concerns that prosecutors were politically biased against Hunter, who was one of the earliest members of Congress to endorse Donald Trump's presidential campaign.

U.S. Government lawyers filed a second document Tuesday urging Whelan to again reject the notion that prosecutors were biased against Hunter, noting they were assigned to the event.

“The (prosecutors') attendance was spurred and initiated entirely by the Secret Service,” the rebuttal stated. “The federal prosecutors were not there as supporters of Candidate Clinton.”

The same document notes that former U.S. Attorney Gregory Vega, who later defended Hunter in the criminal case, attended the Clinton fundraiser as a paying contributor.

Hunter, 43, and his wife and former campaign manager, Margaret, were named in a 60-count indictment in August 2018, accusing the once-powerful couple of misusing more than $250,000 in campaign contributions.

The 47-page indictment accused the husband and wife of beginning the illegal spending less than a year after they arrived in Washington D.C. in January 2009, when Duncan Hunter succeeded his father, also named Duncan Hunter, in Congress.

Margaret Hunter, 44, pleaded guilty to one count of conspiracy in June and agreed to testify against her husband. She is scheduled to be sentenced next month. Both Hunters are expected to receive significantly less than the five-year maximum sentence.

The newly published records show that Hunter and his wife were all but broke for most of the time Duncan Hunter served in Congress.

Despite the congressman's privileged upbringing and a congressional salary of approximately $175,000 a year, the family overdrew their checking account more than 1,000 times in a span of just seven years, the sentencing memo states.

“There was in fact not a single month between 2009 and 2017 when the Hunter family bank account had a positive balance throughout the month,” the filing states.

One witness told prosecutors Hunter had to check his bank balance to buy a bottle of water. The same witness said Hunter's father regularly supplemented his son's income with frequent $1,000 payments, private-school tuition, extra funds for basic needs such as car repairs and even money for clothes.

“Hunter embodied the very definition of living paycheck to paycheck,” prosecutors wrote. “… It is also easy to see why Hunter would know that the only way he could afford to pay for basic family living expenses, lavish meals and luxury vacations was to use campaign funds.”

The sentencing memo also notes that as soon as Duncan Hunter arrived in Washington D.C. he became part of the capital city elite. He was invited to parties almost every night Congress was in session, the document notes.

Hunter met a woman at one such gathering in April 2009, and quickly moved in with the unidentified woman, prosecutors said. Later, the Alpine congressman used campaign funds to pay for a romantic weekend in Lake Tahoe, according to prosecutors.

Other court records show Hunter engaged in at least four other extramarital affairs, often subsidizing getaways with political donations to his congressional campaigns.

The sentencing memo also recounts Hunter's frequent use of campaign funds to pay restaurant and bar tabs in Washington D.C. and in San Diego.

“Hunter rarely used his personal debit card to pay for meals or nights out,” prosecutors said.

The spending increasingly worried some members of Hunter's congressional staff, but neither the congressman nor his wife tempered their spending practices despite warnings from the staff, the memo notes.

All the while, Hunter cast blame on others, including his wife and child, the memo says.

In 2016, after The San Diego Union-Tribune began asking questions about Hunter's campaign reports, Hunter texted his chief of staff to say the questionable spending was not his fault.

“Dude, I'm not even sure hot (sic) to respond to this (expletive). I have no answer. My family (expletive) me,” Hunter texted chief of staff Joe Kasper. “…I have no idea what to say. And my marriage…”

The Union-Tribune report was picked up by national media, the memo notes, and Hunter and his staff quickly realized that their future campaign filings would be heavily scrutinized. Even so, the excess spending did not stop — at least until the FBI raided Hunter's home and offices in 2017.

The prosecutors singled out Hunter's military service in agreeing to a reduced score in the sentencing guidelines that help calculate a suggested prison term.

They noted that he signed up for the U.S. Marine Corps voluntarily soon after the terror attacks of Sept. 11, 2001, and that he has deployed to the Middle East on multiple occasions in service of his country.

“Hunter quit a promising job and left behind his wife and 1-year-old son upon entering Officer Candidate School,” the memo states.