The Hunters allegedly used $500 in campaign funds to fly the family’s pet rabbit Eggburt across the country with them, according to the plea agreement. 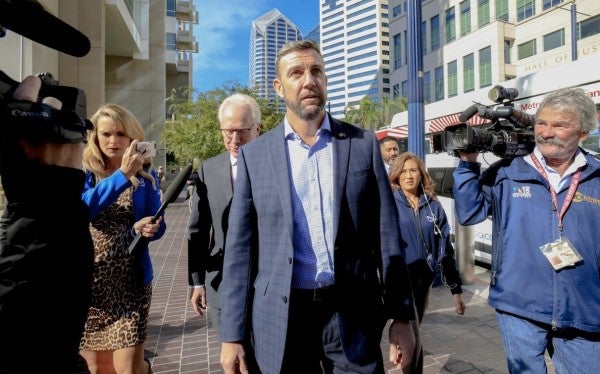 After years of denials and claims he was the target of a political witch hunt, Rep. Duncan Hunter, R-Alpine, is scheduled to appear in federal court Tuesday morning to change his plea of not guilty to charges stemming from a sweeping campaign finance investigation.

The announcement was posted on the U.S. District Court docket Monday morning without any supplemental documentation.
“Notice of change of hearing as to defendant Duncan D. Hunter,” the docket entry states. “Change of Plea Hearing set for 12/3/2019 10:00 AM in Courtroom 3C before Judge Thomas J. Whelan.”

The reversal comes nearly six months after Hunter's wife and former campaign treasurer, Margaret Hunter, admitted to her role in a widespread scheme that saw the couple allegedly spend more than $200,000 in campaign donations on family expenses like vacations, gas, groceries, school lunches and oral surgery. Such spending is prohibited to prevent undue influence by contributors.

“It's important not to have a public trial for three reasons, and those three reasons are my kids,” Hunter told KUSI in an interview aired just minutes after the court notice.

It was not immediately clear what specific crime Hunter might admit when he appears in San Diego federal court Tuesday, or what agreement his lawyers made with prosecutors relating to a possible prison sentence or an end to Hunter's congressional tenure. The congressman was seeking re-election but typically a guilty plea would include an agreement to step down.
The trial, which already was pushed back twice as defense attorneys challenged various claims in the federal indictment, was scheduled to begin Jan. 22.

Prosecutors, along with the defendant, were due in court Tuesday morning to debate Hunter's latest motions over whether defense attorney Paul Pfingst has a conflict of interest defending his client because Pfingst's law firm represented witnesses in the case. The change of plea hearing will apparently take place instead.

The change of plea, if entered and accepted by the judge, also would close the complicated appeal that Hunter filed earlier this year. In an unusual move, the East County congressman appealed his prosecution in July to the 9th U.S. Circuit Court of Appeal even before his trial opened.

Hunter, who will turn 43 on Saturday, and his wife were charged in August 2018 with 60 criminal counts related to their use of Hunter's campaign contributions and each faced decades in prison if convicted on all charges. Both pleaded not guilty to the charges when they were arraigned.

Margaret Hunter, 44, changed her plea in June to guilty to a single count of conspiracy and agreed to testify against her husband. She faces up to five years in prison when she is sentenced in April, but is likely to serve substantially less time. The couple has three children.

According to the indictment, the Hunters relied for years on campaign contributions to pay routine family expenses such as dental bills, home repairs and fast-food meals. They also used the donations to pay for exotic vacations, private-school tuition, video games and plane tickets for Margaret's mother to travel to and from Poland.

The Hunters used more than $500 in campaign funds to fly the family's pet rabbit, Eggburt, across the country with them, Margaret Hunter admitted in her plea agreement. The initial indictment also alluded to several unnamed “individuals” who appeared to have more than professional relationships with Duncan Hunter.

Earlier this year, as the congressman continued to deny his guilt and prosecutors disclosed more of their evidence in public court filings, it became clear that Hunter had extramarital affairs with at least five different women over many years — and paid for them with campaign funds.

Though never identified publicly, three of the women were noted to be lobbyists and two others were reported to be congressional staffers. According to the July court filings, Hunter used campaign funds to pay for a three-day weekend at Lake Tahoe with one woman who was not his wife. On another occasion, he used political donations to pay for a stay at the Liaison Capitol Hill hotel in Washington D.C., records show.

The indictment also said that Hunter and his wife were well aware that their use of the campaign donations was questionable.
Their joint bank account was overdrawn more than 1,100 times over the six-plus years of records examined by prosecutors and the couple racked up some $36,000 in overdraft penalties — fees they paid using campaign funds, the indictment stated.

Text messages included in court files show that at one point Margaret advised her husband to use the campaign credit card to buy a pair of Hawaiian shorts he wanted but could not afford — and to tell his then-treasurer that the purchase was in order to assist veterans.

Since investigations into his campaign spending started in mid-2016, Hunter has spent more than $800,000 on attorneys, including several for his criminal defense, according to his campaign filings.

The criminal charges from August 2018 came two-plus years after the Federal Election Commission and The San Diego Union-Tribune first questioned campaign expenditures Hunter reported in April 2016 — a series of video-game purchases and a payment to his children's private school. Hunter initially blamed his son for grabbing the wrong credit card to pay the video-game charges, explaining that both of the cards were blue.

Later, the congressman appeared to blame his wife for improper charges, pointing out that she was in charge of the family finances and she was receiving $3,000 a month to serve as his campaign treasurer.

The Union-Tribune continued to raise questions about Hunter's campaign spending over the months that followed. By the 2016 general election, Hunter had repaid about $60,000 to his campaign for expenditures he said were mistaken or insufficiently documented. Neither the denials or repayment quelled the investigation. The lawmaker dismissed follow-up stories by the Union-Tribune as “fake news” and said the newspaper was out to get him.

But federal prosecutors were not so sure. They opened their criminal case in mid-2016, a probe that Hunter dismissed as being conducted by “deep state” partisans within the FBI and others in the U.S. government.

The investigation, and the cost of his legal defense, took its toll on Hunter and his family. The congressman and his wife sold their Alpine home in 2017 to pay off family debts and moved into the nearby home of Hunter's father.

All the while, the U.S. Marine Corps lieutenant who served multiple tours of duty in Iraq and Afghanistan before he succeeded his father in Congress in 2009, remained adamant than he did nothing wrong. His lawyers argued in court as recently as this summer that the campaign spending, including resort stays and meals with girlfriends, legally constituted legislative acts — meaning they could not be prosecuted as crimes under the speech or debate clause of the U.S. Constitution.

The questions surrounding Hunter's campaign spending has yet to cost him his support among voters in the 50th District, a region his father — who is also named Duncan Hunter — held for 14 terms. Hunter was returned to the House of Representatives in 2016 and again last year.

But the East County congressman was stripped of his committee assignments after his indictment last year, and denied any new assignments under the Republican Party rules adopted for the 116th Congress. With no committee assignments and a looming indictment, Duncan Hunter, has drawn formidable challengers hoping to win his seat in the upcoming primary March 3 and general election in November 2020.

Republican challengers include former San Diego Councilman Carl DeMaio, former Rep. Darrell Issa, and State Sen. Brian Jones. Hunter also faces a challenge by Democrat Ammar Campa-Najjar, who narrowly lost to Hunter in 2018. In October, Hunter failed for the first time to get the endorsement of the Republican Party of San Diego County, which instead declined to endorse any candidate in the race.

Devin Burstein, Hunter's appellate lawyer, told The San Diego Union-Tribune in a phone call Monday that he supported his client at this difficult time in his life. He declined to provide information about his client's plea deal.