Rep. Duncan Hunter said that the United States needs to launch a preemptive strike against North Korea in order to... 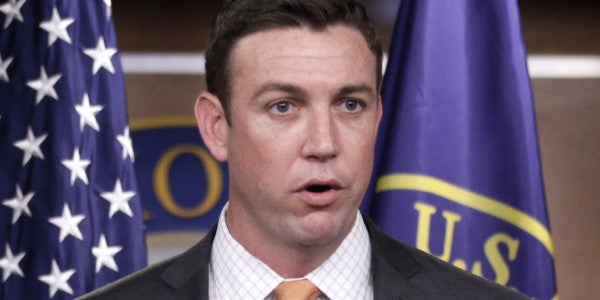 Rep. Duncan Hunter said that the United States needs to launch a preemptive strike against North Korea in order to prevent the rogue nation from harming the U.S. first.

“You could assume, right now, that we have a nuclear missile aimed at the United States, and here in San Diego. Why would they not aim here, at Hawaii, Guam, our major naval bases?” Hunter, a California Republican, said during an appearance on San Diego’s KUSI television station Thursday.

Hunter, a member of a House Armed Services Committee and the subcommittee with jurisdiction over the United States’ nuclear arsenal, did not say if the military should strike North Korea with conventional or nuclear weapons.

Hunter or his spokesman could not be reached for further comment Thursday night.

His comments come after President Donald Trump, in his first address to the United Nations General Assembly, said that the U.S. is prepared to attack North Korea.

“The United States has great strength and patience, but if it is forced to defend itself or its allies, we will have no choice but to totally destroy North Korea,” Trump said.

Hunter called the president’s remarks “great” and not “wishy-washy.” He added that North Korea should join the United Nations in order to bring them into a dialogue with stable countries. He also said that would expose North Korea officials to New York City, the home of the U.N. headquarters, and show them the prosperity they could achieve with reforms.

A pre-emptive strike on North Korea would likely involve an assortment of military hardware, including surface ships and submarines armed with Tomahawk missiles stationed in the Western Pacific, bombers flying sorties out of Guam, and attack aircraft based in South Korea.

In addition to possibly attempting to use long-range missiles, North Korea would likely try to attack Seoul, a city of nearly 25 million people located about 30 miles from South Korea’s northern border, with long-range artillery, according to military experts.

Attacking North Korea comes with risks. When he was an adviser in the White House, Steve Bannon told The American Prospect that the United States has no viable military option for North Korea.

“Until somebody solves the part of the equation that shows me that 10 million people in Seoul don’t die in the first 30 minutes from conventional weapons, I don’t know what you’re talking about, there’s no military solution here, they got us.”

There are also concerns about what response a pre-emptive strike would bring from China and Russia.

Defense Secretary James Mattis said a war with North Korea would be “catastrophic” and that Seoul would be thoroughly shelled. He said the United States and its allies would win, but at a tremendous cost.

“It will be a war more serious in terms of human suffering than anything we have seen since 1953,” he said. He was not speaking specifically about a pre-emptive strike.

North Korea has successfully tested nuclear weapons as well as missile systems that could deliver a warhead, but analysts aren’t sure that they have fully developed the technology needed to attack mainland United States.

Doubts are greater that North Korea has built a nuclear warhead compact enough to fit into an intercontinental missile and that they can keep the warhead intact during its violent descent toward a target.

Hunter acknowledged that North Korea’s nuclear capabilities might not be fully mature, and likely lack precision.

“They can reach the U.S. mainland. They might be able to hit it within a block radius. They may be aiming for Coronado but hit El Cajon,” he said.

But the United States needs to assume that North Korea is capable of a successful nuclear attack, he said.

“I don’t know how much more reckless (North Korean leader Kim Jong Un) needs to be and what the United States needs to see,” Hunter said. “This is a clear and present danger.”