Judge delays start of prison time for ex-Rep. Duncan Hunter due to COVID-19 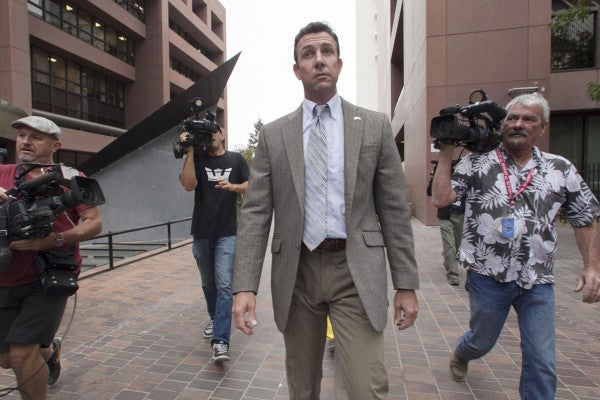 SAN DIEGO — A federal judge on Thursday granted a request by the federal government and a lawyer for former Rep. Duncan Hunter to move his date to surrender for his prison sentence until as late as Jan. 4, in light of the ongoing COVID-19 pandemic.

In the order, filed Thursday in the U.S. District Court for Southern California, Judge Thomas J. Whelan granted the request based on a finding that uncertainty surrounding the coronavirus pandemic was good cause for delaying Hunter’s surrender until “on or before Jan. 4, 2021” at 12 p.m., according to court records.

Hunter, formerly a Republican member of Congress from the San Diego area, was scheduled to surrender later this month to begin his 11-month prison sentence for conspiring to illegally convert more than $150,000 in campaign money to personal use.

Hunter pleaded guilty to the single felony count in December, and prosecutors dropped the remaining 59 charges in the indictment filed against Hunter and his wife and former campaign manager, Margaret, in August 2018.

He was sentenced March 17, and had been scheduled to surrender for incarceration on May 29.

The government and Hunter’s lawyer said in the motion filed Tuesday that delaying Hunter’s date to surrender was appropriate “due to the ongoing COVID-19 pandemic and the unknown impacts the disease will have in the coming months.”

In exchange for the government’s agreement to the motion, Hunter agreed not to seek a sentencing modification or any form of pre-surrender credit for home confinement toward his 11-month prison sentence, the motion said.

Margaret Hunter pleaded guilty to the conspiracy count in June as part of a plea agreement with prosecutors. She agreed to testify against her husband as part of the deal and prosecutors agreed to drop the remaining 59 counts in the indictment.

As of Thursday, she was scheduled to be sentenced June 8, according to court records.