He is one of two soldiers that were killed that day, and posthumously awarded the Silver Star. 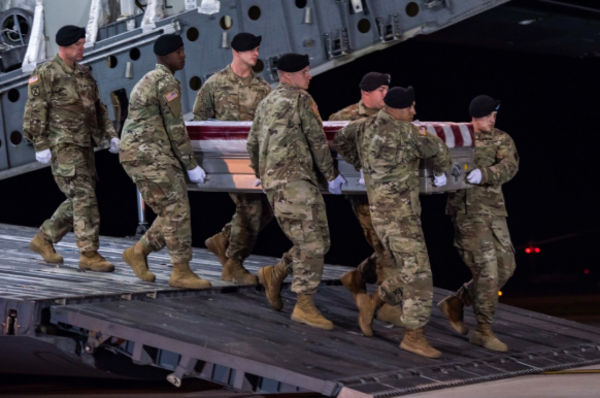 The family of one of the Army Special Forces soldiers killed in the 2017 Niger attack, Staff Sgt. Dustin M. Wright, will receive the Silver Star award on Wednesday.

The Army said in a press release on Tuesday that Wright is being recognized “for his valorous actions on that day.” The award will be presented by Maj. Gen. John Deedrick, commanding general of the 1st Special Forces Command (Airborne).

In 2018, it was reported by the New York Times that then-U.S. Special Operations Command chief Army Gen. Raymond Thomas had asked if Wright was “eligible for the Medal of Honor after reading survivors' accounts of the attack. When U.S. and Nigerien troops were attacked on October 4, 2017, Wright was killed “trying to rescue a wounded comrade who eventually died,” the Times reported.

The head of U.S. Army Africa Command, Marine Gen. Thomas Waldhauser, told Task & Purpose in 2018 that “there were numerous acts of extraordinary bravery” on the day of the attack, and “they should be adjudicated as SOCOM deems necessary.”

In 2017, Wright's family said in a statement that while an investigation into the attack couldn't bring back their loved one, it could “help to educate and prepare future operators to better combat our enemies. … War is hell, and even the best laid plans go to the wayside when the first bullet flies.”