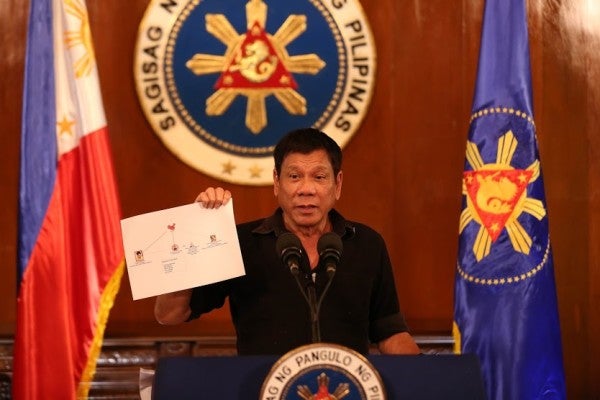 In no uncertain terms, Philippine President Rodrigo Duterte has told his nation that perceived troublemakers will be shot dead.

On a late-night televised address Wednesday, Duterte told his country: “My orders to the police and the military, if anyone creates trouble, and their lives are in danger: Shoot them dead.”

The warning came after some residents in Quezon City in Manila held a protest after they did not receive supplies, according to Al Jazeera. The police tried to break up the protesters, but many refused to go home, and 20 people were arrested.

Duterte said the government's orders needed to be followed and the country needed to maintain order. No one was to harm health workers and doctors.

On Tuesday, the country of 107 million recorded its largest daily increase of coronavirus infections and deaths. Total confirmed cases were at 2,084, with 88 deaths.

The president's threat of death is the latest measure taken in a country that already had open coffins on streets to deter people from going outside and water cannons dousing streets in disinfectant.

Duterte has used the threat of gun violence before.

The Guardian reported that after winning the presidential election in 2016, he derided those who deal or use illegal drugs, telling an audience of about 500: “These sons of whores are destroying our children. I warn you, don't go into that, even if you're a policeman, because I will really kill you.”

“If you know of any addicts, go ahead and kill them yourself as getting their parents to do it would be too painful,” he said.

In 2016 and much of 2017, 18 regional anti-drug units targeted street drug dealers, killing at least 3,900 suspects. On top of that, another 2,300 people were killed by gunman not linked to the police.

“Let this be a warning to all,” he said on Wednesday.