‘Earthquake’ Off Florida Coast Was Actually Explosion Set Off By Navy

Saturday's undersea “earthquake” off northeast Florida actually was the Navy doing an experimental explosion, said John Bellini with the U.S.... 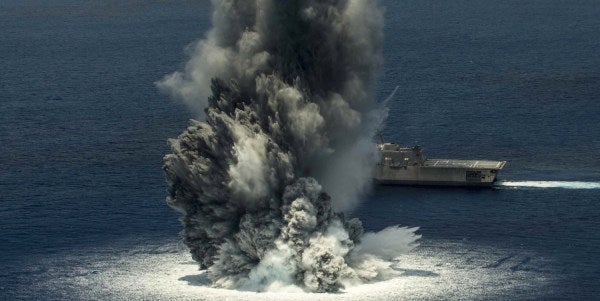 The shock from the 10,000-pound explosive caused a minor earth tremor, registering 3.7 magnitude on a Geological Survey seismometer at Disney World, Orlando.

It was detected at 4 p.m. Saturday about 156 miles east northeast of Daytona Beach.

Later, the Navy confirmed it was detonating underwater explosives to test a new ship's ability to withstand shock. Based on the information, the Geological Survey reclassified the quake as an experimental explosion, Bellini said.

The explosion was the latest in a series of tests in the ocean that started June 10, said Dale Eng, spokesman for the Naval Sea Systems Command, Washington, D.C. The ship being tested is the USS Jackson, based out of Mayport Naval Air Station near Jacksonville.

So far, said federal officials, there are no signs the explosions harmed sealife.

Before the latest explosion, the Navy had notified the National Marine Fisheries Service the explosion could occur anytime from July 16 and 20, weather permitting.

Real earthquakes are rare in Florida. The last recorded on the Treasure Coast was in the 1870s. Dr. James Henshall, of Kentucky, felt rumblings underneath him at night while camping with others camping along the St. Sebastian River in northern Indian River County. Henshall's book, “Camping and Cruising in Florida,” said, “I learned afterward that it was quite severe in some portions of the state. At the Cape Canaveral lighthouse “it threw oil out of a lamp on the reflector … and shook the solid brick tower of the Jupiter lighthouse to its base.”

The possibility is remote for an effect of earthquakes: tsunamis. Along the Treasure Coast, such waves could come either from an earthquake zone off Puerto Rico or from across the ocean from the area near Portugal, National Weather Service forecaster Scott Spratt said.

Indian River County is the only county on the Treasure Coast to be designated as “TsunamiReady” by the National Weather Service. That means the county has contingency plans for handling a tsunami and has posted signs along the beaches.