Editor’s Note: The following story highlights a veteran at Eaton. Committed to including talented members of the military community in... 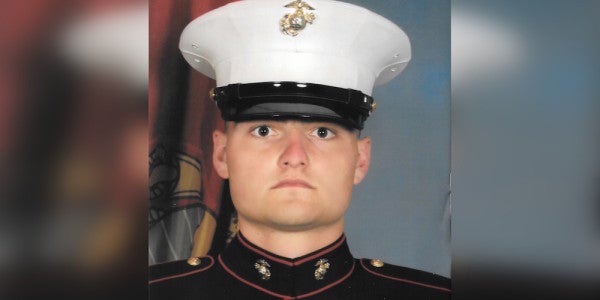 Editor’s Note: The following story highlights a veteran at Eaton. Committed to including talented members of the military community in its workplace, Eaton is a client of Hirepurpose, a Task & Purpose sister company. Learn more here.

Perhaps the story begins as you’d imagine: High school graduate enlists in the Marine Corps, serves his time, and then transitions to the civilian world. He starts out working at an entry-level job, with hopes of moving up.

For Kyle Herren, that’s just the beginning of a great story. Herren joined the Marines after spending a little time taking college classes. When he returned to the civilian workforce, he found a home at Eaton at the manufacturing facility.

For the last 100+ years Eaton, a power management company, has grown substantially while keeping true to their innovative beginnings. The Eaton Business System has several things in common with the military, such as striving to improve on a continual basis. Eaton employs over 1,000 military veterans and has specific military recruiters who help match past experiences with jobs available. Herren’s mechanical aptitude and former experience as a Marine Corps aviation tech was a great fit at Eaton.

But it could have been easier

One thing Herren really stressed was that he should have finished his degree while serving in the military. “I would have finished while I was in. I would have been able to enter the career field farther up the ladder. I would be farther in my career now,” he said. While he loved the experience he acquired through his time in the military, and how it prepared him for what he’s now doing, he recognizes that he could have progressed more quickly with a completed degree.

“Hard work and positivity will go a long way during the job search,” he said. “Work through every obstacle and remember the long-term goal.” Not everything is going to fall into place easily through the transition, and service members must continue working hard.

But hard work isn’t going to be enough. Herren strongly advises service members to finish their degree before transition. “It’s quite feasible to get a degree while in the military,” he said. But if you can’t, Eaton is there to help as well. “Eaton was incredibly supportive while I was going to school,” Herren explained.

One of the things he was especially grateful for was Eaton’s flexibility in work. “It was really nice to have the time to focus on projects, to study, and to attend classes without worrying about work being upset,” he said. Herren graduated with his bachelor’s in general studies from the University of Nebraska at Kearney.

Eaton also provides tuition assistance to those continuing their education while working with them. Herren is glad to know that he’ll have the support of Eaton when he continues his education in the future.

Helping others is a reward

Herren is enjoying his current position as a production supervisor, but that isn’t the end for him. After a few years of experience, he’s planning to pursue his MBA. “My long-term goal is to move up in the Eaton Corporation, maybe as a plant line manager or something similar,” he said. “I plan to do this by asking questions, learning more about the company, and learning as much as possible from my supervisors.”

Just as Herren looks to his supervisors as mentors, he is happy to return the favor and mentor some of those who work under him. “There are a few operators that I work with who are looking at going to college,” Herren said, “I’ve been helping them out with balancing workload and choosing classes.”

Not only is Herren helping his co-workers to pursue education, he’s also encouraging them to have a bigger vision for their future. For instance, he’s giving them a sense of what a management position looks like as well. “I spend some time showing them the paperwork side of a supervisory position and what the role really entails. I want them to succeed and promote, and I enjoy helping them do that.”

From the aviation hangar in the Marine Corps to the production team at Eaton, veterans like Kyle Herren are working hard to make a difference.