All the SEAL’s men: How Eddie Gallagher became untouchable 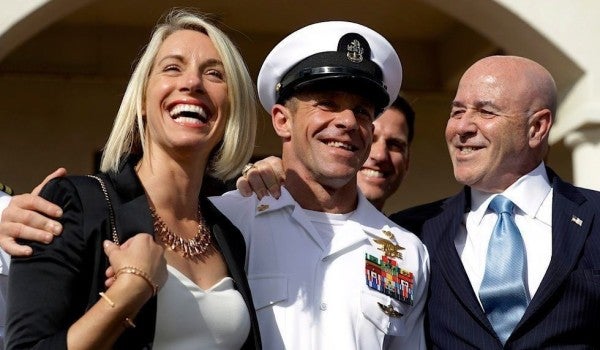 SAN DIEGO — President Donald Trump's interventions in a San Diego-based Navy SEAL's war crimes case disrupted the military justice system for months, culminating Sunday in the firing of the Navy secretary as controversy boiled over at the top of military leadership.

The extraordinary interventions by the most powerful man in the country essentially made Navy SEAL Chief Edward Gallagher, who was convicted of posing with the body of a deceased Islamic State fighter, untouchable, observers said.

Richard Spencer, who was fired as Navy secretary, wrote in an opinion piece in The Washington Post that it's irregular for even top military leaders to get involved in personnel matters like the Gallagher case.

“Normally, military justice works best when senior leadership stays far away,” he wrote. “A system that prevents command influence is what separates our armed forces from others.”

Gallagher was charged with killing a wounded teenage Islamic State fighter during a deployment to Iraq in 2017. Several of his Navy SEAL teammates reported their platoon chief for that death and for shooting Iraqi civilians — charges for which Gallagher was acquitted in July.

He was convicted of appearing in photos with the corpse of the fighter and was sentenced to four months in the brig and a reduction in rank of one pay grade. Chief of naval operations, Adm. Mike Gilday, affirmed that sentence in October.

At key points in Gallagher's case, the president proved he had his back.

“President Trump involved himself in the case almost from the start,” Spencer wrote, adding that Trump called him twice before Gallagher's trial began. Trump ordered Gallagher released from confinement in March.

Defense Department officials found themselves pushing against a narrative the president had gleaned from Fox News, that the accused was a hero the Navy was persecuting, according to a report in The Post.

“I came to believe that Trump's interest in the case stemmed partly from the way the defendant's lawyers and others had worked to keep it front and center in the media,” Spencer wrote in his opinion piece.

On Nov. 15, after Gallagher's conviction, Trump restored the SEAL's rank to chief.

Finally, late last week, Trump ordered the Navy to drop plans for a review board that was to decide if Gallagher would remain a SEAL and keep his SEAL trident pin. On Sunday, Spencer was forced to resign.

Every step of the way, when Gallagher lost in court or via official channels, Trump as commander in chief swooped in and delivered him a win.

The Navy this week announced that all review boards planned for Gallagher and three of his senior officers were canceled. The Navy said Gallagher will be allowed to retire a SEAL, ending an ordeal spanning almost two years.

Through it all, a team of people, including some of Gallagher's family members, lawyers, politicians and TV pundits, worked to capture Trump's attention for the case.

A senior Navy official in San Diego told the San Diego Union-Tribune Monday that the president was making decisions on “bad” information from people on Fox News.

Timothy Parlatore, one of Gallagher's attorneys, told the Union-Tribune that the president was getting good information from diverse sources, including Fox News, allowing him to make better decisions.

Parlatore said it was military leaders like Spencer who were giving Trump bad information from a tainted investigation.

“Navy leadership believed it; they never took the time to look,” Parlatore said about the prosecution's story about Gallagher.

“For a commander, whether it's the president or whoever, to make a decision they need to have all the information — not just the slanted position of people under him with an agenda. … If you only get your news from one source, you're not getting the full story.”

The “full story,” as Trump saw it, started taking shape as early as December 2018.

That was when Trump first tweeted about the case of another service member — Army Maj. Matthew Golsteyn — after his wife appeared on Pete Hegseth's “Fox & Friends” weekend show.

“At the request of many, I will be reviewing the case of a 'U.S. Military hero,' Major Matt Golsteyn, who is charged with murder,” Trump said in his tweet. “He could face the death penalty from our own government after he admitted to killing a Terrorist bomb maker while overseas.”

Golsteyn told CIA interviewers in 2011 he killed a suspected bombmaker in Afghanistan. He was not charged with a crime at the time. In 2016, Golsteyn again admitted to the killing — this time during a Fox News appearance. The Army charged him with murder in 2018, just before his wife appeared on Hegseth's show.

Trump pardoned Golsteyn on Nov. 15, weeks before the soldier was set to go to trial.

Trump's tweet on Golsteyn's behalf was seen as a sign that the president was willing to consider other war crimes cases.

In January, the day of Gallagher's arraignment in San Diego, his brother, Sean Gallagher, appeared on “Fox & Friends.” It was to be the first of many such appearances by Gallagher's family members.

After Gallagher was arraigned in San Diego, U.S. Rep. Duncan Hunter, R-Calif., issued a statement calling on Trump to intervene.

“Due to verifiable political nature of the Navy's justice system, I believe that Chief Gallagher's matter needs to be taken away from the Navy and President Trump himself needs to personally review and dismiss this case, taking an American hero out of a prison cell and back on the front lines where he belongs,” Hunter said in a Jan. 4 statement.

On Jan. 9, Hunter sent a letter directly to Trump on Gallagher's behalf and spent the following weeks calling on Navy leaders to release the SEAL from the Miramar brig.

At least eight times from January to March members of Gallagher's family, Hunter or host Hegseth discussed Gallagher's case on Fox News, framing the story as the persecution of a hero.

On March 30, via tweet, Trump ordered Gallagher released from the Miramar brig.

This was about the time that Parlatore joined the Gallagher defense team. Parlatore was a New York-based lawyer who previously had represented Hegseth in another matter.

Parlatore says it was another well-known New Yorker — former police commissioner Bernard Kerik — who connected him to the Gallaghers. Parlatore represented Kerik when he was released from prison after serving more than three years for felony tax fraud and making false official statements.

“I represented Bernie Kerik when he got out of prison,” Parlatore told the Union-Tribune. “He told (the Gallaghers) that if you want a good, scorched-earth defense, call Tim.”

Advocates for Gallagher, including Hunter, Parlatore and Hegseth, discussed the case at least eight more times on Fox News in April and May.

On May 21, The Daily Beast reported that Hegseth had been lobbying Trump for Gallagher not just on TV but also in private conversations.

In an email to the Union-Tribune, Mukasey said he too was connected to the case via Kerik, and first asked him about it in February.

As Mukasey joined the team, reports emerged that Trump was considering pardoning Gallagher before his trial. Trump backed away, saying he would let the process play out.

Before Gallagher's trial began, the lead prosecutor was removed from the trial after he was caught in a scheme hatched by the Naval Criminal Investigative Service to track defense attorney emails.

In July, Gallagher was acquitted of all but one charge against him, and Trump tweeted his congratulations.

The day after his acquittal, Gallagher granted Hegseth and “Fox & Friends” an exclusive interview.

The campaign on Fox News continued, despite the end of the court-martial, and included this weekend's shake-up at the top of the Navy.

Parlatore went on “Fox & Friends” to decry the planned trident review boards, calling the plan to review Gallagher, ordered by the commander of Naval Special Warfare Command, Rear Adm. Collin Green, the move of a “coward.”

On Sunday, after conflicting accounts emerged about alleged threats by Spencer and Green to resign over Trump's interference, Gallagher appeared again on “Fox & Friends” with Hegseth. He thanked Trump for his intervention.

“I got the president's tweet, and I'm overjoyed he stepped in again, being the leader that he is,” Gallagher said.

Hegseth gave Gallagher the opportunity to speak directly to the president.

“I just want to retire with all the honors that I earned,” Gallagher said. “I don't know how many times I've thanked the president, he keeps stepping in, doing the right thing. I want to let him know the rest of the SEAL community is not about this right now. Let me retire Nov. 30.”

Trump took to Twitter again Sunday in a series of tweets, saying Gallagher had been treated “very unfairly” by the Navy.

On Monday, Esper told reporters the president ordered him to let Gallagher keep his trident.

Parlatore has argued that the Navy put its thumb on the scales of justice in the Gallagher case. He defended Trump's actions, even though he acknowledged that the president also put his thumb on that scale.

“Thumbs on both sides keep the scale balanced,” Parlatore said.