The Navy SEAL who raised nearly $750,000 from a community of supporters to successfully fight war crimes charges in a San Diego court-martial is again asking for the public's help for one more round with the Navy 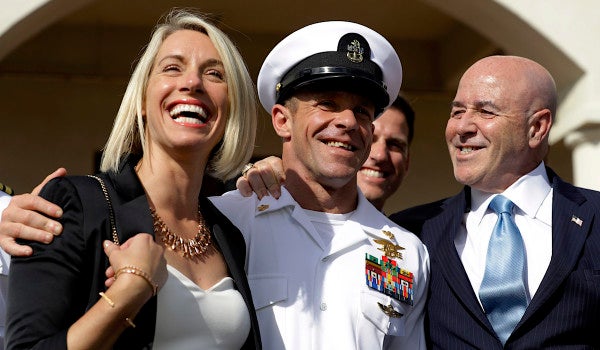 SAN DIEGO — The Navy SEAL who raised nearly $750,000 from a community of supporters to successfully fight war crimes charges in a San Diego court-martial is again asking for the public's help for one more round with the Navy.

Chief Eddie Gallagher, through an attorney, is asking the public to help him persuade a Navy admiral to reduce his jury-imposed punishment for posing with the body of a dead Islamic State fighter in 2017.

Specifically, he's looking for other service members who have received punishment for taking photos with dead enemy combatants — and received a lesser sentence.

On July 2, a jury acquitted Gallagher of several war crimes allegedly committed during a deployment to Iraq in 2017. Seven members of Gallagher's platoon testified during the two-week trial that they witnessed one or more of their chief's alleged offenses, including that he stabbed a wounded teenage Islamic State fighter in the neck and shot civilians with his sniper rifle.

After the alleged stabbing, several members of the platoon posed for photos with the dead fighter's body, including Gallagher, according to court testimony.

Although the jury acquitted Gallagher on all of the other charges, it found him guilty of posing for the photos. As punishment, the jury imposed a sentence of a reduction in rank one grade to E-6, docked his pay for two months and sentenced him to four months in jail — time Gallagher already served while on pretrial confinement.

The reduction in rank will reduce Gallagher's Navy pension.

On Tuesday, Gallagher's lead defense attorney Timothy Parlatore took to the “Free Eddie Gallagher — Navy SEAL Chief” Facebook page and its more than 40,000 followers. He asked any service member who had taken photos with dead combatants and received a lesser punishment to come forward.

The search, Parlatore said, is part of his ongoing fight to ensure Gallagher is not reduced in rank. He wants Gallagher's sentence converted from a court-martial conviction to a nonjudicial punishment, something that would not go on Gallagher's record.

“My duty is to get Chief Gallagher home with his family and a full pension,” Parlatore told The San Diego Union-Tribune on Thursday.

WATCH NEXT: Exclusive Footage Of Russian Sailors Sunning Themselves On A Warship