Edward Gallagher, the Navy SEAL who was acquitted of war crimes and was pardoned by President Donald Trump, has launched a lifestyle brand 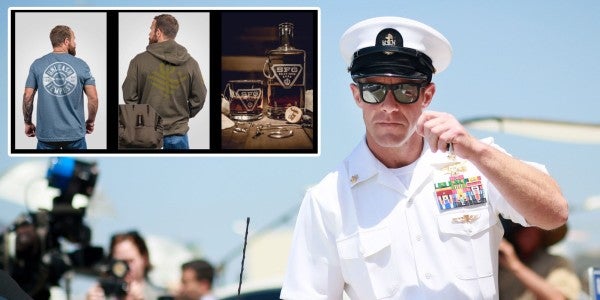 Edward Gallagher, the Navy SEAL who was acquitted of war crimes and was pardoned by President Donald Trump, has launched a lifestyle brand.

Navy SEAL Special Operations Chief Gallagher, had been charged with crimes including murder and was accused by his own platoon of targeting civilians including women and children. He was acquitted on all but one charge in July 2019.

He received months of support from Trump even before his trial began, and was pardoned by Trump in November 2019.

Now, The New York Times first reported, Gallagher appears to have embraced the branding opportunities that come with his increased public profile by launching a clothing collaboration, alongside nutrition supplements and a coffee endorsement.

The new collaboration includes t-shirts, sweatshirts, and “Drinkware” which consists of a branded whiskey glass and decanter.

The step is an escalation of Gallagher's move into branding since the case, which turned him into a conservative figure with appearances on Fox News. He also has t-shirts with two other clothing brands for two different t-shirts that include the words “Free Eddie.”

And he also sells other t-shirts, including ones that say: “In a world full of mean girls, be a Gallagher!!”

Edward Gallagher in May 2019 (Andrea Gallagher via Reuters)

Gallagher was charged after his fellow SEALs accused of him of stabbing a young ISIS fighter who his team was treating medically to death in 2017. He posed for a picture with the dead body.

Gallagher was acquitted of all charges, except for posing with the body, by a military jury in July, leading to his demotion within the Navy from chief petty officer to petty officer first class.

Gallagher has denied any wrongdoing, while squad members, and other military officials, have been critical of Trump's intervention.

Nine Line, the clothing company now collaborating with Gallagher, wrote on its website that even though he was acquitted Gallagher now had “a criminal record, and a huge chunk missing from his lifetime pension as a result.”

It said that both Gallagher and his wife, Andrea, felt they had been treated similarly by the “Washington establishment” as Trump frequently claims he is. It added that they felt that “perhaps that's why President Trump took a particular interest in Gallagher's case.”

Nine Line described Salty Frog Gear — Gallagher's collaboration with the company — as “a coastal lifestyle brand with an edge.”

“With specialty garments flexible enough for a fishing trip at sea or a weekend afternoon on the range, SFG provides functional, versatile, and affordable apparel solutions for your next outdoor adventure.”

They said of Dave Phillips, a military reporter and Pulitzer Prize winner: “10 years ago – You would have failed Journalism school for your complete inability to separate the truth from your biased liberal agenda.”

Trump's intervention in Gallagher's case drew widespread criticism from within the Navy and the Pentagon.

One unnamed SEAL who had testified against him said it risked politicizing the military.

“When you look at politicians getting involved in military justice — whether it's a congressman from San Diego or the president — with their involvement, it isn't justice.

“It's political, when shooting civilians and executing prisoners shouldn't be.”

Veterans also said that Trump's pardons could harm trust in the military.

SEALs who served alongside Gallagher called him “freaking evil” and “toxic” during the investigation into him, according to leaked interviews published by The New York Times in December.

“You could tell he was perfectly OK with killing anybody that was moving,” Special Operator First Class Corey Scott, a medic, then told investigators.