Marine killed in 1943 is finally coming home, and getting the funeral he deserves

He'll be buried at Arlington National Cemetery on Feb. 10. 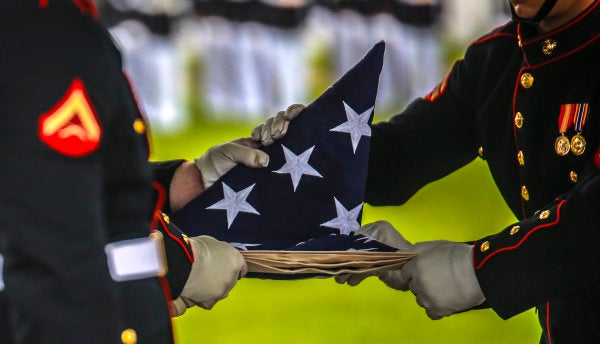 Marine Pfc. Edward A. Nalazek, a Chicagoan born to proud Polish immigrants, died with nearly 1,000 fellow Marines during the Battle of Tarawa in 1943. He was 27.

But whenever McNicholas pressed family members for more information, he got nowhere.

“Anytime I asked anybody, they just cried,” he said. “My one sister calls it the wall of tears. They just couldn't talk.”

McNicholas could not even visit his uncle's grave. Nalazek had been buried in a trench with other Marines on Betio Island, where he fell. But the cemetery's location was lost to history, and in 1949 the family was told that Nalazek's remains could not be recovered.

The Defense POW/MIA Accounting Agency (DPAA) announced in November that Nalazek's remains had been accounted for, and he will be buried Feb. 10 at Arlington National Cemetery. It marked the end of an effort that was decades in the making, a case that illustrates the challenge of recovering and identifying those who fell in past conflicts.

It starts in 1967. That year, construction work uncovered multiple sets of remains on Betio Wharf, both Japanese and American. This was before the age of DNA identification. The American remains, still unidentified, were buried in the National Memorial Cemetery of the Pacific, also known as the Punchbowl, in Honolulu.

In 2013, McNicholas was alerted by one of his two sons, Edward, of Chesapeake, to a story in The New York Times that described the effort of History Flight, a nonprofit foundation dedicated to recovering the lost Marines of Tarawa and other fallen servicemen. McNicholas and his sister submitted DNA samples in case of a match.

Two years later, History Flight uncovered the remains of 36 Marines in a trench near near the Betio Wharf. Because of the possible connection between those remains and the ones already at the Punchbowl, the different sets were studied together.

As it turned out, Nalazek's remains were in both groups.

“My uncle was buried between the two,” McNicholas said.

The family's attention now to turns to Arlington National Cemetery, where Nalazek will be buried with military honors. It is also a chance to look back and reflect.

Nalazek studied for the priesthood from 1938 to 1941 before being absolved of his vows and leaving the seminary. His reason for leaving is a mystery, but McNicholas does not think the onset of war had anything to do with it.

He enlisted in the Marines on March, 18, 1942, and trained as a combat engineer. The Battle of Tarawa was the beginning of the U.S. campaign in the Central Pacific.

The Japanese had heavily fortified their position, and Nalazek went ashore amid ferocious fighting. He was killed on Sunday, Nov. 21, 1943, the second day of the battle. The circumstances of his death are unknown, except that he died from a gunshot wound. By the end of the week, the U.S. had control of Betio Island and the rest of the Tarawa Atoll.

McNicholas hopes the story of his uncle will highlight the painstaking work of organizations like DPAA and History Flight. He has special praise for Mark Noah, the president of History Flight, whom he calls “a great American.” And he's overwhelmed by the efforts of Marines who are arranging all the details of the Feb. 10th funeral at Arlington.

He is also left to contemplate fate.

Had his Uncle Eddie lived, McNicholas' mom and dad never would have met.

Nalazek's sister, Josephine, was an Army Air Corps nurse scheduled to go overseas. When her brother died, she stayed stateside and met her husband, an Army flight surgeon. They had four daughters and a son, McNicholas.

McNicholas went on to serve in the Air Force. He served in intelligence and was stationed in different parts of the world. He served for 20 years, retired in 1996 and worked as a contractor at Langley Air Force Base in Hampton.

Asked what the upcoming service will mean, McNicholas didn't hesitate.

“Closure,” he said. “And me being retired military, I'm proud. I'm named after him.”