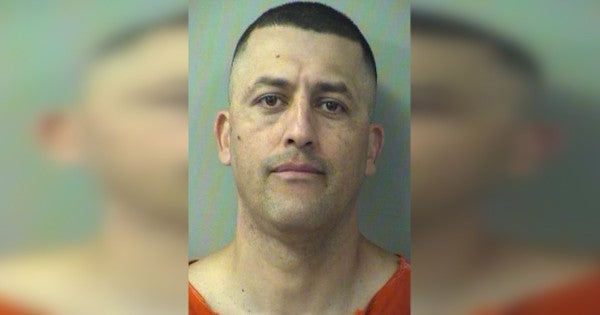 An officer assigned to the 33rd Fighter Wing at Eglin Air Force Base is being held without bond in the Okaloosa County Jail on a felony charge of sexual battery.

Capt. Maxsimiliano Alvarado, 39, was arrested Aug. 21 by the Okaloosa County Sheriff's Office, on the basis of a warrant connected to a Crestview Police Department investigation. Alvarado is charged with a single count of sexual battery on a person 18 years of age or older, according to the Sheriff's Office report. The exact age of the victim was not immediately available Monday.

Alvarado has been with the 33rd Fighter Wing for more than a year, according to Lt. Savannah Stephens, the wing's public affairs officer. He is assigned to the wing's operations support squadron, Stephens said.

The arrest was made in connection with a reported Oct. 7, 2018, incident at a Crestview residence, during which Alvarado is alleged to have inappropriately touched the victim and subsequently had sexual intercourse with her, all against her will. According to a Crestview Police Department report, the victim, who was visiting the residence, “was intoxicated and in and out of consciousness” during at least part of the assault, which began on a living room couch. The victim subsequently went into a bedroom and locked the door, according to the report.

Alvarado, who shared the residence with a live-in girlfriend, continued to pursue the victim, entering the bedroom. As the victim regained consciousness, Alvarado was having sexual intercourse with her, and she “pushed off Alvarado and told him to stop … ,” according to the report. The victim then headed toward the master bathroom, apparently to seek help from someone else in the residence. Alvarado followed her, grabbing her breast as she tried to get away.

The victim was eventually able to return to the bedroom, from which she called a cab after calling two friends to tell them about the assault. The cab took her to Destin-Fort Walton Beach Airport, where she contacted an Okaloosa County sheriff's deputy. Subsequently, a Crestview Police Department investigator was called and obtained a statement.

The victim was then taken to Fort Walton Beach Medical Center for a sexual assault examination. At some point thereafter, two Crestview Police Department investigators contacted Alvarado. He consented to collection of swabs for DNA testing, and allowed officers to take bedding from the residence.

The evidence collected from the victim and Alvarado was sent to the Florida Department of Law Enforcement laboratory for processing. In January, a lab report confirmed the presence of male DNA on items from the sexual assault examination, and an August lab report confirmed the DNA as belonging to Alvarado. Alvarado was arrested the day after the August lab results were emailed to the Crestview Police Department.