"This pause allows us to focus on what's needed to safely resume flying training," wrote the Eglin-based 33rd Fighter Wing. 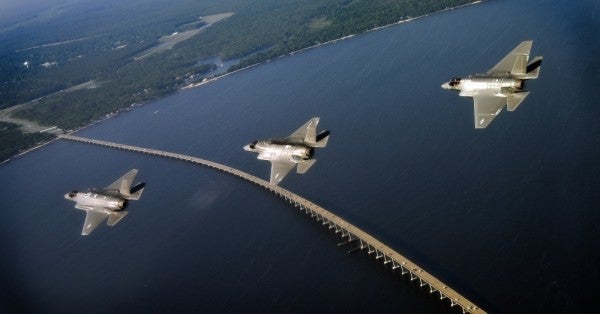 The commander at Eglin Air Force Base in Florida has called for a “safety pause” after two stealth fighters crashed at the base within just a few days of one another.

The pilots were able to eject from the aircraft safely. The two crashes, which occurred during routine training flights, are under investigation.

“The events over the past few days remind us that the defense of our country can be a dangerous business,” Brig. Gen. Scott Cain, 96th Test Wing commander, said in a message to the base. “It is very important to me that we now take a safety pause.”

“I'm asking commanders at all levels to conduct a virtual safety day on Thursday, May 21,” Cain said. “I've asked my Safety Office to develop a safety briefing for use across the installation.”

The Eglin-based 33rd Fighter Wing has temporarily suspended flight operations. “In the interest of safety, flying operations at the 33d FW are on hold at this time,” the wing told local media. “This pause allows us to focus on what's needed to safely resume flying training.”

In a video message to the force, Cain indicated that flying operations at Eglin Air Force Base would not resume until sometime after Memorial Day.

The F-22 and F-35 are both US fifth-generation stealth fighters.

The US is no longer making the advanced F-22. There are a little over 180 F-22s in the US arsenal, and the unit cost for each fighter is about $150 million. Th F-35As built for the Air Force cost around $90 million, although the price is expected to drop over the next few years.