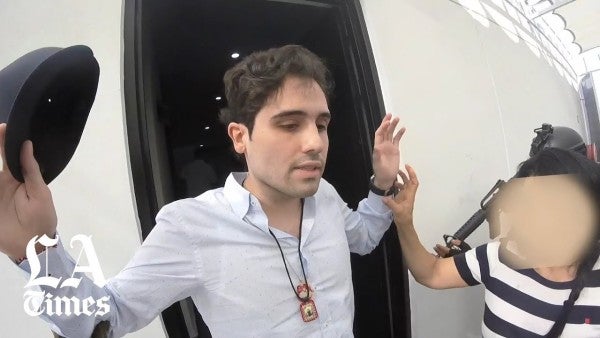 MEXICO CITY — It is an extraordinary video — a behind-the-scenes look at what happened earlier this month when Mexican security forces briefly captured one of the world's most-wanted cartel leaders.

In the clip, which was released Wednesday by Mexico's defense secretary, the Sinaloa drug cartel chief Ovidio Guzman Lopez is shown surrendering to soldiers who had trapped him in a home in the northern city of Culiacan.

Instead of putting Guzman in handcuffs and immediately taking him into custody, the soldiers waited while he made a phone call.

Outside, Sinaloa cartel fighters had seized control of much of the city, taking hostages, blocking intersections with burning vehicles and surrounding a housing complex for the families of military personnel. The soldiers, who apparently knew they had no clear way out, begged Guzman to order his men to stand down.

“Tell them to leave now!” a soldier is heard shouting at 28-year-old Guzman, who is the son of notorious drug boss Joaquin “El Chapo” Guzman.

The video shows the desperation of Mexican authorities during the failed operation to capture Ovidio Guzman, who is wanted in the United States on drug trafficking charges.

Eventually, the soldiers freed him and retreated, a decision that Mexican President Andres Manuel Lopez Obrador said was made to save lives.

The video was part of a detailed presentation by Defense Secretary Luis Cresencio Sandoval, who used maps, videos and photographs to explain to reporters exactly how cartel gunmen wielding weapons of war overpowered elite security forces.

Yet serious questions about the failed operation remain, and neither Sandoval nor Lopez Obrador took questions after the presentation.

The biggest question is who gave the orders for the operation nearly two weeks ago.

In the aftermath of the incident, top Mexican officials changed their story, saying at first that soldiers had discovered Guzman while on a routine patrol. Later, they admitted that the operation was planned, but suggested that it had been carried out by rogue security forces who had not received authorization from their superiors.

Many in Mexico doubt that claim, saying that top military officials would have known about an operation of this magnitude.

Lopez Obrador has said he was also unaware of the operation to target Guzman.

The botched raid has provoked anger among some government critics within the country and has strained Mexico's relationship with the United States.

“The events of last week were very concerning to us,” he said. “What we need to see is greater political … commitment from the highest levels of government in Mexico.”

His comments provoked an angry reaction from Lopez Obrador, who said that the U.S. must respect Mexico's sovereignty and that “officials from other countries should not offer opinions about internal issues that only concern our government.”

Earlier this year a U.S. federal judge issued an arrest warrant for Guzman, charging him with trafficking cocaine, methamphetamine and marijuana.

Under previous Mexican presidents, the two nations collaborated closely on matters of security, with the U.S. spending more than $2 billion on training for Mexican police officers and soldiers and other anti-crime initiatives. U.S. officials have played a key role in Mexico's security strategy, helping to identify top drug cartel leaders and then urging their counterparts to pursue them.

The capture of Joaquin “El Chapo” Guzman was an example of that. He was detained by Mexican authorities in 2016 and extradited to the United States, where earlier this year he was convicted on drug trafficking and murder charges and sentenced to life in prison.

But Lopez Obrador, an amateur historian who has published books about American imperialist tendencies in Mexico, has pushed a very different security strategy.

Earlier this year, he declared an end to the government's war on cartels and said that instead he will address inequality and poverty and other root causes of violence. He has said the militarized strategy of his predecessors has only increased insecurity in Mexico, where homicides are at an all-time high, and have converted the country “into a graveyard.”

Lopez Obrador has also made surprising entreaties to members of the Sinaloa cartel, visiting “El Chapo” Guzman's small mountain hometown while a candidate for president and earlier this year instructing Mexican immigration officials to help Guzman's mother and sisters get humanitarian visas that would allow them to travel to visit him in the U.S.

Lopez Obrador has not explained how that rhetoric squares with the government's strategy, including the militarized operation to capture Guzman.

Alejandro Poire Romero, who served as interior secretary under former President Felipe Calderon, said Lopez Obrador is offering “two narratives,” a kinder, gentler approach to organized crime, while also continuing the militarized strategies of the past.

“There is an ambivalence,” Poire said. “And that is concerning.”