At first, Army Pfc. Glendon Oakley Jr. was completely unaware of the chaos unfolding just around the corner. Then he pulled his gun 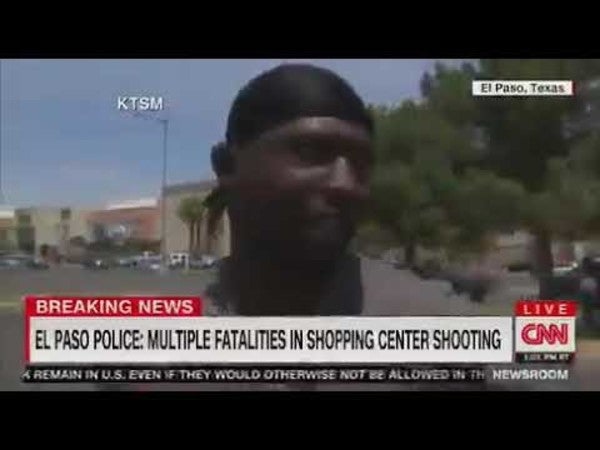 At first, Army Pfc. Glendon Oakley Jr. was completely unaware of the chaos unfolding just around the corner. Then he pulled his gun.

A 22-year-old Army automated logistics specialist assigned to the 504th Composite Supply Company, 142nd Combat Support Sustainment Battalion, 1st Armored Division Sustainment Brigade at Fort Bliss, Texas, Oakley had been shopping at a sporting goods store inside the Cielo Vista Mall in El Paso when a young child burst into the store shouting about an active shooter at the nearby Walmart.

“The guy at the register and I sort of looked at each other,” Oakley told Task & Purpose in a phone interview on Saturday. “He's a little kid … are you going to believe him?”

The threat was very real. At least 20 people were killed and dozens more wounded when a gunman opened fire at the Walmart, sending terrified bystanders fleeing through the neighboring mall.

When Oakley exited the store minutes later and headed to the neighboring Footlocker, he finally heard the sound of gunfire echoing across the mall. He immediately pulled the Glock 9mm he occaisionally carries under Texas's concealed carry laws. While he had just returned from an incident-free deployment to Kuwait, this was not his first firefight.

“That's what you do,” he told Task & Purpose. “You pull your gun, you find cover, and you figure out what to do next.”

Oakley was born into an Army family. His father, Glendon Oakley Sr., served for 31 years before retiring in 2011 at the rank of sergeant major; his mother, Wendolyn D. Oakley, retired as a master sergeant in 2001 after two decades; and his older sister, Glenda Oakley, is a retired captain.

But Oakley didn't take a direct path to the Army. Growing up in Killeen, Texas while his father was stationed at Fort Hood, he described his formative childhood years as “a little rough.”

Oakley eventually moved to Macon, Georgia, where he met an Army recruiter who, over the span of several years, helped him put together the appropriate waivers to allow him to actually enlist.

“I had to get an ASVAB waiver, I had to get a tattoo waiver, everything … even though my parents were in the Army, nobody would give me the time of day,” he said. “There was one recruiter who didn't give up on me. For two years, he didn't give up.”

Oakley finally went off to basic training in September 2017, plowing through Basic Combat Training and Advanced Individual Training before he graduated around March 2018. A few months afterwards, he was deployed to Kuwait with the 504th.

His stay in Kuwait was “fine,” Oakley said, although he felt he missed out on actually seeing combat.

Oakley had been home from Kuwait for just about four months when he found himself brandishing his Glock stuck in the Cielo Vista Mall Footlocker. A handful of employees had initially brought down the store's metal security gate, but they had decided to make a run for the mall exits. Oakley followed, an impromptu rear guard for the group.

The group quickly stumbled upon a group of a dozen children clustered in one of the mall's open play areas, screaming for their parents. Oakley says he tried to get fleeing bystanders to help, but none would stop.

In an interview with local television station KTSM outside the Cielo Vista Mall, Oakley was clearly shaken, the adrenaline pumping through his system. And when reached by Task & Purpose on Saturday, he said said that, despite his training, he was “scared for my life.”

“I heard four kids died,” he said, his voice softening. “I wish I could have gotten more kids out of there. I wish those guys who ran would have stayed … I just think, what if that was my child? How would I want some other man to react?”

A pause: “I wish they had some sense of service.”

CORRECTION: A previous version of this story stated that Glenda Oakley retired as a first lieutenant. She retired as a captain.(8/4/2019; 12:29 am)