"If you think I'm in a room with a veteran and I don't immediately thank him for his service and then make sure he's getting his VA benefits, you're insane!" 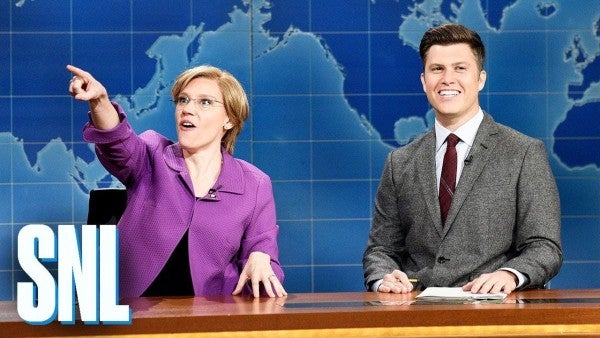 Kate McKinnon has been playing Warren on the show, and she nails the folksiness that generates such devotion from the senator's fans and so annoys her detractors.

Warren's campaign raised $24.6 million in the third quarter, and that news allegedly inspired the skit. What the writers were really interested in is the widely discredited story that Warren hired a Marine veteran for a bondage-fueled motel tryst.

Some complicated background: Political operatives Jacob Wohl and Jack Burkman held a press conference last week, where they introduced America to Kelvin Whelly, a Marine veteran who claimed that Warren had hired him for a kinky sexual encounter at a Woburn, Massachusetts, Hilton Hotel.

The former lance corporal served with an infantry unit in Hawaii as a machine gunner and claimed that he was a combat veteran, saying he deployed to Afghanistan in 2012 with 1st Battalion, 3rd Marines. Now, the Corps is telling Newsweek that Whelly did not deploy to Afghanistan.

Wohl and Burkman also claimed that the 24-year-old Whelly had met up with Warren while he was employed by the (real) gigolo agency Cowboys 4 Angels. C4A told Rolling Stone that Whelly had never even applied for a job there and, anyway, he was “not up to caliber to work at our agency.”

OK, there's the background. I'm going to shower while everyone checks out the video.

After discussing her small donors and making a pretty wicked joke about Hillary Clinton's 2016 campaign, host Colin Jost asks McKinnon/Warren about the sex rumors at about 2:10 into the clip.

“That's Elizabeth Warren's vibe for sure,” she replies. “Transactional sex with a younger man. Look, rumors have power when they feel true. What has ever felt less true than any single part of that?”

Then, she goes in for the kill: “If you think I'm in a room with a veteran and I don't immediately thank him for his service and then make sure he's getting his VA benefits, you're insane!”

She ends the segment by calling to thank a donor named “Michael” in NYC. Weekend Update host Michael Che answers his cell phone, and she thanks him for his $10K donation. Colin Jost is shocked and asks Che why he gave the big donation.

Che responds, “Yeah, I like that she had sex with that Marine.”

For those interested, Whelly supposed lives in Phenix City, Alabama, and commutes to work as a fitness consultant in Columbus, Georgia. He's scrubbed his Instagram account since the press conference generated more laughter than shock, but a few shots have survived to show off Whelly's physique.