The Pentagon is reviewing Elon Musk's federal security clearance following the billionaire's marijuana toke on a California comedian's podcast in September, according to a U.S. official. 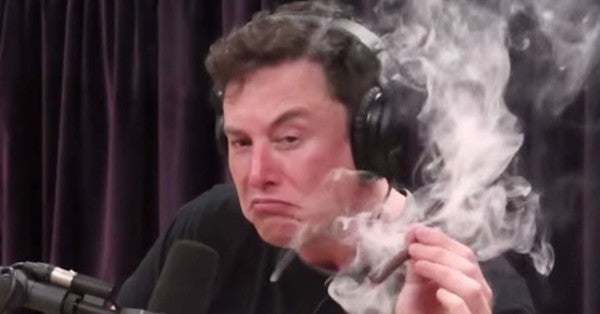 WASHINGTON — The Pentagon is reviewing Elon Musk's federal security clearance following the billionaire's marijuana toke on a California comedian's podcast in September, according to a U.S. official.

Musk has refiled his SF-86 security form, which requires a federal employee or contractor seeking a clearance to acknowledge any illegal drug use over the previous seven years, according to the official, who asked not to be identified. The entrepreneur has a secret-level clearance because of his role as founder and CEO of Space Exploration Technologies Corp., which is certified to launch military spy satellites.

A SpaceX official, who asked not to be identified, said the review hasn't had an impact on the company. SpaceX's day-to-day operations are run by President and Chief Operating Officer Gwynne Shotwell. The company has won contracts for national security space launches since Musk's podcast incident, including one for three launches on Feb. 19 for $297 million.

But the refiling and review underscore the continuing ramifications from the chief executive officer's decision last year to smoke marijuana on the podcast, which quickly went viral. And it highlights the legal discrepancies between federal and state policy on marijuana use: While about three dozen states have taken steps to decriminalize pot, its use remains a federal crime.

It “totally would make sense” for the Defense Security Service to ask Musk to update his application and to investigate the situation further, said Mark Zaid, a Washington attorney who specializes in federal whistle-blower cases and representing clients facing clearance challenges. Zaid doesn't represent Musk and isn't aware of the details of his case.

James Gleeson, a spokesman for closely-held SpaceX, declined to comment.

Musk in September sipped whiskey during a podcast of more than two and a half hours with comedian Joe Rogan in California that touched on topics from flamethrowers and artificial intelligence to the end of the universe.

The security refiling may be the least of Musk's issues after a tumultuous week in which he got into another spat with the U.S. Securities and Exchange Commission over his tweets about Tesla Inc., unveiled cheaper versions of Tesla's electric vehicles and caught investors by surprise with plans to close auto showrooms. He also watched SpaceX launch a new spacecraft designed to ferry humans into orbit.

Musk's “adjudication” review by the Defense Security Service continues with no decision yet, the U.S. official said. Typically during an adjudication a person keeps his or her security clearance but loses access to information classified as secret, according to the official. If the drug use involves minor issues or doesn't appear to contain any serious security concerns, the unit reviewing the case could just close it and update Musk's record.

Nevertheless, there can be serious consequences for breaching security protocols.

Smoking marijuana is “absolutely grounds for termination or loss of a clearance if a federal employee or contractor currently uses” it, lawyer Zaid said in an email.

Top Defense Security Service officials are aware of Musk's reapplication and review, said the U.S. official, who declined to discuss the case in detail but guided a reporter through the process Musk's review is following.

“The Department of Defense is following its normal process when information which may affect an individual's clearance eligibility is brought to our attention,” the service said in an emailed statement to Bloomberg News, when asked if Musk was required to resubmit his clearance form after the podcast. “For privacy and security reasons, we do not publicly discuss individual clearance status.”

Although marijuana is legal for recreational use in many states, including California, it remains illegal for federal employees or contractors with security clearances, a point reiterated most recently in 2014 in a government-wide memo issued by then-Director of National Intelligence James Clapper, which remains in effect.

Clapper's October 2014 memo says “an individual's disregard of federal law pertaining to the use, sale or manufacture of marijuana remains relevant” in reviewing whether a security clearance must be reevaluated.

Separately, Musk's marijuana use drew criticism from analysts and investors who follow Tesla, his electric car company, as a sign the CEO wasn't focused sufficiently on addressing management and production issues during a particularly tumultuous period.

During the podcast, Musk said that while he wasn't “a regular smoker of weed,” he took a drag from what Rogan described as a blunt containing tobacco mixed with marijuana.

“You want some of it? You probably can't because of stockholders, right?” Rogan asked.

Musk replied, “I mean it's legal, right?” and then took a drag.

WATCH NEXT: This Navy Anti-Marijuana PSA Is A Great Reminder Of How Uncool Navy Is, Bro