If a war were to break out on the Korean peninsula over Pyongyang’s development of long-range intercontinental ballistic missiles (ICBMs)... 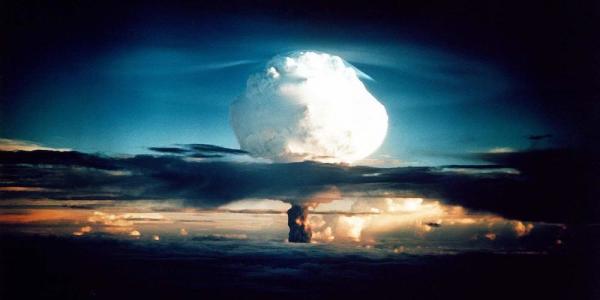 If a war were to break out on the Korean peninsula over Pyongyang’s development of long-range intercontinental ballistic missiles (ICBMs) and its thermonuclear weapons development efforts, the resulting conflict would be catastrophic even if it remained purely conventional. Worse still would be if nuclear weapons were used—which could ultimately escalate into Armageddon.

While the devastation that nuclear weapons can wreak on to cities and other population centers is obvious, the use of tactical nuclear weapons is often overlooked. In the case of Pyongyang using tactical nuclear weapons to defeat a U.S.-led military intervention, American and allied forces might suffer more damage than many might expect—particularly from the effects of electromagnetic pulses (EMPs) generated by such weapons. EMPs can do serious damage of electrical systems that are not specifically hardened to withstand such events. Indeed, U.S. forces are particularly vulnerable due to America’s reliance on networks and advanced sensor system—many of which were developed after the end of the Cold War.

Defense analysts and military officials are reluctant to comment openly about the seriousness of the problem due to the level of classification, but they knew that only some U.S. and allied hardware is protected from the effects of an EMP blast.

“Some of it is, and some of it is not… Very specific to particular systems,” retired Air Force Lt. Gen. David Deptula, the dean of the Mitchell Institute and former service intelligence chief, told The National Interest.

“It would be an additional challenge to overcome… EMP hardening is very expensive, and in the world of the last 25 years of putting reducing costs as a priority over full spectrum operational capability, it has not been a high priority.”

Bryan Clark, a senior fellow at the Center for Strategic and Budgetary Assessments, was more direct: “Most of our systems are not hardened against EMP. Some older analog or Cold War-era systems are.”

“It is unclear whether a high atmospheric nuclear explosion would cause a significant EMP effect at lower altitudes and whether North Korea could execute such an attack without also affecting their own capabilities.”

Mark Gunzinger, an air power analyst at the Center for Strategic and Budgetary Assessments and a former Boeing B-52 strategic bomber pilot, told The National Interest that the Pentagobeen expecting such asymmetric threats, but needs funding to address the challenge.

“Over the last decade, DoD [Department of Defense] has expressed its growing concern with ‘hybrid’ threats posed by potential aggressors with a mix of conventional, unconventional, and asymmetric capabilities including WMD [Weapons of Mass Destruction],” Gunzinger said.

“This will require funding to upgrade DoD's forces and weapon systems, including capabilities that can operate in WMD environments.”

On the specific issue of North Korea, Gunzinger said that an EMP would impact Pyongyang’s force too—but conceded that U.S. forces are probably more vulnerable to such effects.

“It is likely that NOKO's use of a relatively unsophisticated EMP weapon over the Korean Peninsula would affect their own forces and possibly their battlespace command and control infrastructure,” Gunzinger said.

Asked directly if U.S forces—which rely heavily on networks and advanced sensors are likely to suffer more—Gunzinger said that was a distinct possibility.

“Quite possibly, yes. Just didn't want to get into it too deeply,” Gunzinger said.

“It could have a crippling effect on military systems and networks that aren't appropriately hardened. Let's not forget the impact it could have on our allies…”

However, even if the North Koreans did not resort to using nuclear weapons to target cities and population centers—targeting only allied military forces or using an EMP blast, it is likely that the U.S. would resort to a nuclear counter-strike.

“If someone had a super-powerful EMP that fried the North American power grid, do you imagine that the President would just shrug and say, ‘Nothing we can do about that’?” Joshua H. Pollack, editor of The Nonproliferation Review and a senior research associate at the James Martin Center for Nonproliferation Studies, told The National Interest.

“I personally suspect that the concept is overblown—a 1.4 megaton bomb that went off with Honolulu in line-of-sight knocked out a few strings of streetlights—but especially if the worst fantasies of the EMP Commission are reality, I don't see how it would affect the workings of deterrence. If someone hits you with a nuclear weapon and it has devastating effects, well, that's the most natural circumstance for a devastating response.”

In any case, it is unlikely that North Korea would show any restrain if the United States intervened to overthrow the regime in Pyongyang.

“It is beyond me why we think an enemy would waste a perfectly good nuclear weapon to experiment with a hypothetical EMP when they could destroy an actual city,” arms control expert Joseph Cirincione, president of the Ploughshares Fund, told The National Interest.

“EMP is a loony idea. Once an enemy uses a nuclear weapon—for any reason—it crosses the nuclear threshold and invites a nuclear response. U.S. military commanders would not say ‘Well, it was only an airburst. We should just respond in kind.’ They would answer with an overwhelming, devastating nuclear counter attack. And our nuclear weapons and command and control are designed to operate in a nuclear war environment, not just some puny EMP blast.”