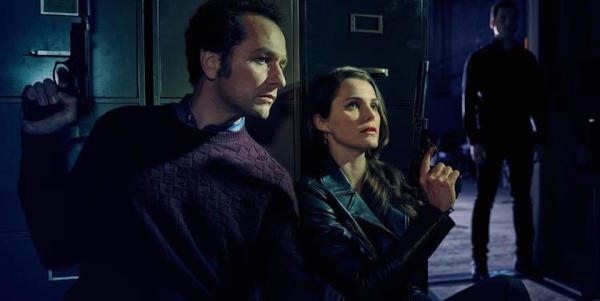 Gregory Allen Justice landed himself in plenty of trouble last year when FBI agents caught him selling stolen military secrets to a man he believed to be a Russian spy. Prison was almost a certainty.

But as he prepares to be sentenced Monday morning in federal court in Los Angeles, Justice faces the possibility of an even lengthier stint behind bars after investigators made the startling conclusion his espionage plans included a plot to murder his ill wife.

Justice, 49, pleaded guilty in May to charges stemming from an undercover sting operation in which he sold sensitive satellite information to an FBI agent masquerading as a Russian intelligence officer, according to court records.

At the time, prosecutors filed court papers that spelled out an odd backstory of what motivated Justice.

Although he told the would-be Russian spy he needed money to care for his ailing wife, bank records showed Justice was actually spending his money on another woman who hoodwinked Justice in an online relationship, prosecutors said. She sent him photos of a European model that she falsely claimed were of herself and convinced him to send money and gifts through the mail, court records show.

Then, last month, prosecutors filed a brief with U.S. District Judge George H. Wu, recommending he sentence Justice to seven years and three months in prison — a harsher punishment than they would have otherwise requested. They revealed that Justice had asked the undercover agent during one of their final meetings to supply him with Anectine, a powerful muscle relaxant that can cause cardiac arrest in overdoses.

Justice told the agent that doctors had administered the drug to his wife in the past and he wanted to use it to help ease her chronic problems breathing during sleep. That excuse, prosecutors wrote in the filing, was a lie.

Medical records showed Justice’s wife had never been given the drug. And when an agent questioned Justice about the drug after his arrest, prosecutors say, the Culver City engineer acknowledged he was “aware that outside of a hospital setting Anectine was most often used as a poison ‘for killing.’”

Justice maintained he had intended only to help his wife. But when the agent asked him how investigators were supposed to interpret his request for the drug, Justice responded, “You're supposed to think I'm trying to kill my wife,” according to court records.

Attorneys for Justice made their own sentencing recommendation, but the judge agreed to their request that it be kept secret.

In the government’s filing, prosecutors said defense attorneys dispute the claim that Justice was scheming to kill his wife.

Justice worked on commercial and military satellites sold to the U.S. Air Force, Navy and NASA, federal court records show. As an engineer, he had access to closely held trade secrets, including anti-jamming technology, encryption plans for communication with satellites and technical data covered by the U.S. Munitions List, federal authorities said.

Because some of the trade secrets were sensitive, they were restricted, under the International Traffic in Arms Regulations, from being disseminated outside the U.S.

Authorities first caught wind of potential problems with Justice in November 2015, when a check of his computer revealed he had inserted a USB device containing five folders with detailed mechanical drawings and design information for a satellite program.

When authorities searched his car, they found handwritten notes with addresses for the Consulate General of Russia in San Francisco and the Embassy of the Russian Federation and its Office of the Defense, Military, Air and Naval Attaches, both in Washington, D.C.

The FBI devised its ploy to catch Justice, and the undercover agent made contact with him in February last year, federal authorities said. Over the next six months, the agent paid several $500 or $1,000 cash payments in exchange for thumb drives containing sensitive files with satellite information, the FBI said.

Authorities have not disclosed the name of Justice’s employer, but Justice’s father previously told the Los Angeles Times that his son worked for Boeing Satellite Systems in El Segundo.

The investigation took on a surreal aspect of life imitating art when Justice told his erstwhile Russian handler that he was enamored with spy thrillers, including “The Americans,” which tells the story of a pair of Russian spies living in the United States during the Cold War.

And, during a later exchange, Justice and the agent talked about how they “wanted to try to build the type of relationship depicted in the TV show ‘The Americans,’” according to court records.

Surveillance teams discovered that Justice’s wife was confined to her home. Justice’s father told The Times his son’s wife had a variety of health issues, including diabetes and chronic accident-related back pain.

In a recorded phone conversation with his wife, federal authorities said, Justice told her that he was canceling all of her medical appointments because he could not come up with money to make repairs to their car to take her to them.

But in reality, Justice spent the $3,500 he received from the agent and more of his money on a woman he had never met in person and who he knew only as “Chay,” according to authorities. In court papers, the woman is identified only by the initials C.M.

Over several months in 2015, Justice sent FedEx packages containing more than $21,000 to the woman who lived with her son and boyfriend in an apartment in Long Beach, according to court records.

A search of Justice’s computer files turned up the forged photographs the woman had sent. And investigators uncovered text messages in which the woman asked Justice for cash payments.

Justice bought her a Dyson fan, two televisions, a grill, kitchen furniture, an iPhone, a purse and a blanket, according to court records. He also paid for dozens of purchases through Amazon.

At their final meeting, the undercover agent brought Justice a substance he said was Anectine. When the agent asked if he had any experience administering the potentially fatal drug, Justice allegedly replied that he had been practicing with insulin.