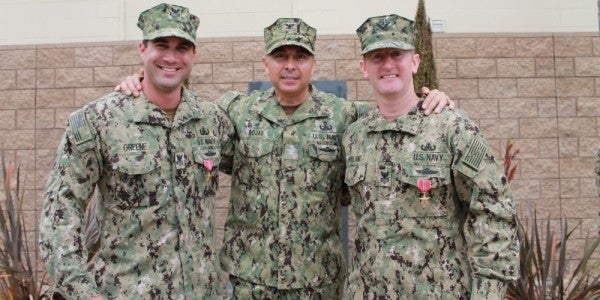 Two California-based sailors have been recognized for extraordinary heroism during a nighttime raid on a remote underground Islamic State group hideout, where the pair fought off 20 terrorists and shielded their comrades from grenades and enemy fire.

Explosive Ordnance Disposal Technicians 1st Class Christopher Greene and Travis Holland were each presented with the Bronze Star with combat “V” device last week at Naval Outlying Landing Field Imperial Beach, California. They were recognized for their actions during a Sept. 18 mission in Iraq's Anbar province while assigned to Special Operations Task Force-West.

The team traveled to the ISIS headquarters hideout by helicopter during the stealthy overnight raid. Despite constant danger of explosive hazards, Greene safely led the combined assault force to the target and began clearing the enemy cave complex, his award citation states.

“While clearing the cave of improvised explosive threats, Petty Officer Greene's element was engaged by 15 to 20 enemy fighters barricaded within the cave system,” it adds. “Without hesitation, he deliberately stepped in the line of fire at a critical time to shield his teammates from close range automatic weapon fire.”

Holland, who'd found the 15 to 20 ISIS fighters barricaded deep inside the cave, shielded the other troops from a blast when he saw two terrorists preparing to throw grenades into the main cavern where his team was standing.

“Petty Officer Holland positioned himself in the open to shield his team from a potentially fatal blast, while also engaging the enemy combatants who were only three meters away,” according to his award citation. “With disregard for his own safety, he repeatedly maneuvered directly in the line of enemy fire to shield his team.”

Both sailors, who are with Explosive Ordnance Disposal Mobile Unit 11, were credited with courage under fire and total dedication to duty.

“The bronze stars placed upon our warfighter's chests symbolize everything that is good about our nation,” Capt. Oscar Rojas, Explosive Ordnance Disposal Group 1's commodore, said at the awards ceremony.

Greene and Holland are credited with devastating the enemy's position and stopping their counterattack. The Bronze Star with “V” is the nation's fourth-highest award for combat heroism.

Rojas presented the sailors with their medals in front of Explosive Ordnance Disposal Mobile Unit 11's memorial, according to a published Navy account of the ceremony. EOD techs locate, identify and dispose of explosive ordnance — a dangerous and in-demand mission, since terror groups in Iraq and Afghanistan frequently use the bombs to kill and hurt coalition forces.

“Having this ceremony right in front of the memorial of our fallen is a sobering reminder of the business that we are in,” Rojas said at the event. “… The words captured in the , they have true meaning behind them because our nation rates the world's most premier EOD force.”

WATCH NEXT: EOD Bomb Bots Have Come A Long Way