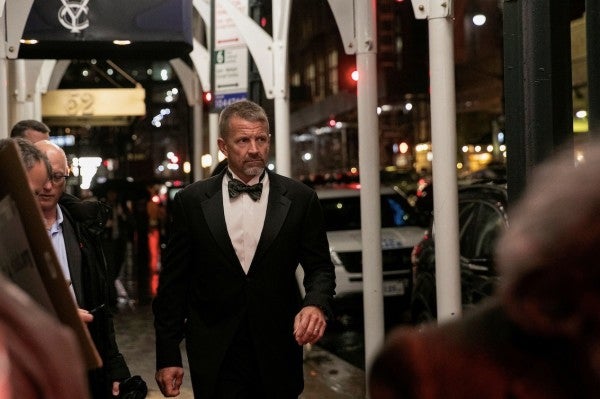 WASHINGTON (Reuters) – Erik Prince, the controversial private security executive and prominent supporter of U.S. President Donald Trump, made a secret visit to Venezuela last month and met Vice President Delcy Rodriguez, one of socialist leader Nicolas Maduro's closest and most outspoken allies, according to five sources familiar with the matter.

The visit, described by one source as “outreach” by Prince to Maduro's government, came just eight months after the founder of the private security firm Blackwater floated a plan to deploy a private army to help the Venezuelan opposition topple Maduro.

It was unclear what Prince, the brother of Trump's education secretary, Betsy DeVos, discussed with Rodriguez. The meeting was first reported by Bloomberg.

A meeting with Rodriguez, who is under U.S. sanctions, could raise questions about whether Prince might have run afoul of U.S. law, which prohibits Americans from virtually any business dealings with sanctioned individuals and specifically with the Venezuelan government. The Venezuelan vice president's office also oversees the country's national intelligence service.

Prince informed one White House official of the planned meeting ahead of his trip, but it was not known whether he asked for approval or advice, according to one of the sources.

The White House declined to comment when asked if U.S. officials had advance word of Prince's visit or whether it was seen as a possible line of communication with the Maduro government. In January, Washington recognized opposition leader Juan Guaido as the OPEC nation's legitimate president and began ratcheting up sanctions and diplomatic pressure in an effort to oust Maduro.

Maduro remains in power. A senior administration official told Reuters in October that Trump's frustration over the lack of results had spurred aides to ready further actions.

Five sources told Reuters that Prince, a businessman known for his right-wing views, visited Caracas around Nov. 20 or 21 and met with Rodriguez, a leader of Venezuela's ruling socialist party who was appointed as vice president by Maduro last year.

“It was something more than a private business trip,” one Venezuelan source in Washington who has contacts with both the opposition and Maduro's government said of Prince's visit.

Whether Prince's visit and his meeting with Rodriguez comport with U.S. law or not, they appear to run counter to the Trump administration's policy to date of isolating Caracas.

The United States and more than 50 other countries have recognized Guaido, head of the opposition-controlled National Assembly, as interim leader after he invoked the constitution to assume a rival presidency in January, arguing Maduro's 2018 re-election was a sham.

Maduro retains the support of the military and of international allies including Russia, China and Cuba.

U.S. sanctions imposed in August bar most U.S. citizens or companies from doing business with the Venezuelan government. Rodriguez, who has traveled the world seeking to shore up what remains of Maduro's backing abroad, was hit with sanctions by the Treasury Department in September of last year.

It described her as member of Maduro's inner circle who helped him “maintain power and solidify his authoritarian rule.”

Peter Kucik, a former expert at Treasury's Office of Foreign Assets Control, which enforces U.S. sanctions, said such a meeting by an American executive with a sanctioned official would run the risk of violating U.S. regulations if they “went beyond casual conversation, entered into an agreement.”

“The more substantive the discussion, the more likely you have a problem,” Kucik said.

Prince's meeting with Rodriguez represents a surprising twist for a businessman with long experience of trying to privatize warfare.

In April, Reuters reported that Prince had proposed using a private army of as many as 5,000 mercenaries to topple Maduro, and sought investment and political support from influential Trump supporters and wealthy Venezuelan exiles, according to sources with direct knowledge of Prince's pitch.

There is no sign that Prince's plan ever advanced beyond an early discussion stage.

Prince was a pioneer in private military contracting during the Iraq war. But Blackwater sparked international outrage in 2007 when its employees shot and killed 17 Iraqi civilians in Baghdad. One of the employees involved was convicted of murder in December and three others were convicted of manslaughter.

Since 2014, Prince has worked with China-based logistics and security company Frontier Services Group. He has also promoted a string of business ventures and pushed the Trump administration to privatize the Afghanistan war.