"I'd said the problems are unconscionable. There's no reason our soldiers and their families should live in the conditions they've lived in." 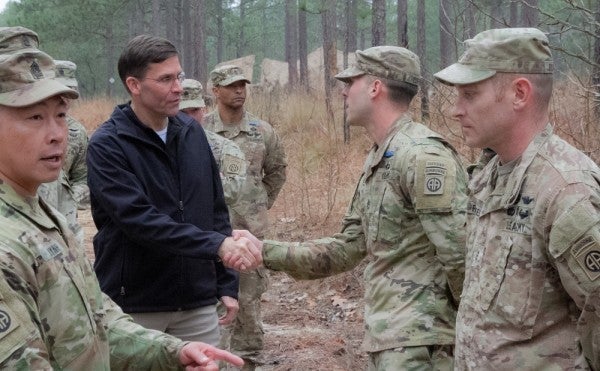 One of the nation's top Army leaders and one of North Carolina's congressional senators said Friday there is no reason why military families on Fort Bragg should have to live with housing concerns like lead paint, cockroaches and ants.

“I'd said the problems are unconscionable. There's no reason our soldiers and their families should live in the conditions they've lived in,” said Secretary of the Army Mark T. Esper at a news conference that followed a town hall meeting.

Esper toured a couple of Fort Bragg homes, participated in a listening session with 10 family members and listened to soldiers and their spouses during the installation's town hall meeting.

A congressional panel met Feb. 13, as family members testified before Congress about problems and health concerns related to housing.

Esper and Army Chief of Staff Gen. Mark A. Milley issued a directive the same day asking all installations across the nation to hold town hall meetings within 15 days and to complete on post housing inspections for families who request it.

“A troubling piece of this it seems to me as well there was a great fear of retaliation out there in the system. It's not by the Army, but by the contractors,” Esper said.

Officials became aware of the situation in 2018 following a Reuters investigation that led to a series of articles detailing mold, health concerns and unsanitary living conditions.

Esper said it is unknown how many Fort Bragg residents are impacted, and that is the purpose of the voluntary inspections.

North Carolina Sen. Thom Tillis toured a couple of those homes with Esper on Friday.

Tillis said he noticed a hole in the ceiling at one of the homes that had been repaired a couple of days ago, but the ceiling was still wet.

He said a maintenance worker who specialized in wall patching made the repairs, but a technician who should fix leaks did not go to the home.

“Their work history says the job's complete, but the problem still exists,” Tillis said, characterizing the issue as a disconnect.

Tillis said multiple agencies are responsible for the problem that has “drifted” over the years.

He said he became aware of the issue about a year ago, when barracks conditions were found unacceptable at Fort Bragg and the Marine Corps base Camp Lejeune.

He and Esper said Army chain of command bear responsibility of not holding the housing private contractor accountable, since military housing was privatized in the mid 1990s and soldiers' basic housing allowance has been allocated for maintenance work.

“It's clear that many cases they have either deferred maintenance and they've done shoddy work that needs to be fixed, but that's something that they should pay for not residents and not the United States Army,” Esper said.

Garrison commanders and the chain of command needs to make changes for quality assurance and quality control, he said.

He said the best way the hold private contractors accountable is financially.

“The best pain you can inflict is the financial pain of withholding payments or reducing incentive fees,” Esper said.

Moving forward he said there are immediate and long term plans to fix the problem.

He said some families are being moved into other housing at the expense of the private contractor.

Feedback he received from the 10 residents during the listening session is that they want to remain on installation so their children can continue attending Department of Defense schools on post.

A tenant bill of rights is being drafted by the Army, which Esper said the Air Force and Navy is participating in, too.

On the congressional level, Tillis said he is having conversations with Rep. Richard Hudson, whose district includes Fort Bragg.

“We're going back and saying what sorts of policies have been set forth that could have caused it, and that's why we're saying if you only look at this through one lense you're going to miss something, so what policy changes can we figure caused the reduction in customer satisfaction or a reduction in maintenance,” Tillis said.

A policy Fort Bragg residents asked him to look at was related to basic housing allowance and soldiers who are promoted and supposed to receive upgraded housing.

Residents said they're still living in the same homes despite the promitions, but their rent has gone up in relationship to the increase of the soldiers' basic housing allowance.

Tilis said he also is asking Esper, Miley and Secretary of the Navy Richard Spencer to provide input about legislative changes that are needed.

Tillis is setting an agenda for another senate oversight hearing on the matter, with reporting back of findings toward the summer and another two or three hearings held this year.

“There's no reason why we can't come up with a fix for it by then, and a part of it is, I'll shift as many resources as possible to fix the immediate problems and then the fix the long term, but I want to stabilize what we saw which are some unacceptable conditions here today,” Tillis said