"The Humvee is a very capable light truck. It's very versatile, it allows us to perform a range of missions," Secretary of the Army Mark Esper said. "Like we like to say, it's one of many tools in the tool kit" 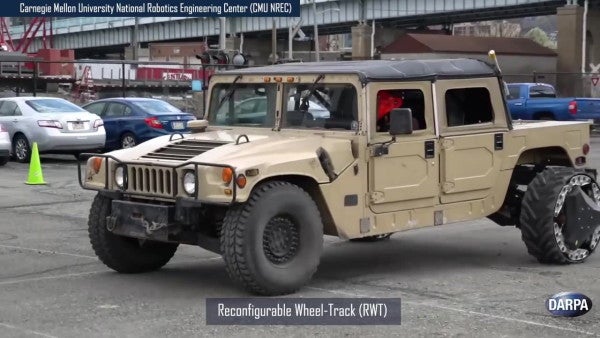 MISHAWAKA — On a visit to the AM General Military Assembly plant in Mishawaka Thursday, Secretary of the Army Mark Esper highlighted his plan to modernize the Army and emphasized the important role he said AM General and its HMMWV (Humvee) will play in that modernization.

“The Humvee is a very capable light truck. It's very versatile, it allows us to perform a range of missions,” Esper said. “Like we like to say, it's one of many tools in the tool kit.”

Standing alongside chairman of the House Appropriations subcommittee on Defense, Rep. Pete Visclosky, D-Gary, Esper touched on his vision to expand the Army's manpower and prepare it for new conflicts.

AM General has long served as the sole Humvee manufacturer for the Army, though the truck's role has changed over time, and Esper said the local company will continue to play a role in the Army's mission decades into the future.

Last October, the company announced new orders for 740 Humvees, as well as a $51.3 million contract to recapitalize existing vehicles that was awarded in September.

One possible future role for the versatile platform is the Hawkeye mobile howitzer platform, essentially, a 105 mm artillery field gun attached to the back of a Humvee chassis. The prototype vehicle, developed in partnership between AM General and Rock Island, Ill.-based Mandus Group, has undergone tests with the Army as a part of a search for a next-generation howitzer.

In November, AM General announced a strategic investment in Mandus Group, but didn't disclose a dollar figure.

Esper said he's not personally very familiar with the Hawkeye prototype, but added that he appreciated AM General's innovation and added that there are a number of programs underway to develop new artillery equipment.

“The purpose of my visit today was really to come see the wonderful workers of AM General and the fine products they produce,” Esper said. “As many of you know, the Army is in the midst of a renaissance right now regarding everything we do, how we man, organize, train, and importantly, equip, the force to make sure we remain relevant and ready for future threats.”

As far as how the Humvee plays into that plan, Esper said discussions with company executives Thursday touched on the implementation of robotics, artificial intelligence, semi-autonomy and full-autonomy for vehicles.

“Those are capabilities we want to build that are consistent with the Army Vision for 2028 that the chief of staff and I published last June,” Esper said. “We had a lot of discussions as we continue to move forward on what's been a mainstay of the Army light truck fleet, the Humvee, from my earliest days in the Army in the 1980s to today and moving forward for the next couple decades.”

SEE ALSO: It Looks Like The JLTV Won't Fully Replace The Humvee After All

WATCH NEXT: That Time The Air Force Accidentally Dropped A Humvee On North Carolina