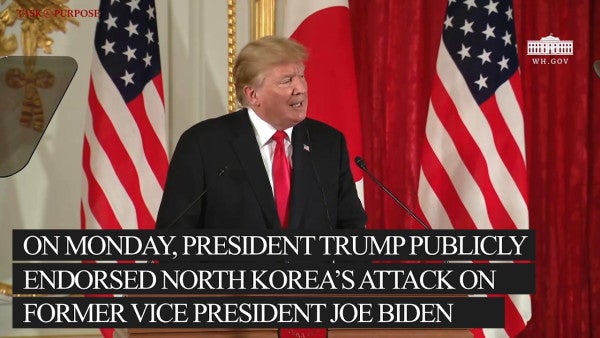 JOINT BASE LEWIS-MCCHORD, Washington (Reuters) – U.S. Defense Secretary Mark Esper said on Wednesday he was open to new alterations in U.S. military activity on the Korean Peninsula if it helped enable diplomats, who are trying to jump-start stalled peace efforts with North Korea.

Esper did not predict whether he might end up “dialing up or dialing down” such activity, as he spoke to a small group of reporters at Joint Base Lewis-McChord on his way to South Korea after North Korea threatened to retaliate if the United States goes ahead with scheduled military drills with South Korea.

Tensions are growing on the peninsula ahead of North Korean leader Kim Jong Un's year-end deadline for Washington to show more flexibility in denuclearization talks.

Esper declined to detail what kinds of activity could be altered but did not rule out a further reduction in U.S. military exercises with South Korea, which President Donald Trump ordered scaled back last year.

The North brands such U.S.-South Korean exercises as hostile and still strongly objects to them, even in their current form.

“I think we have to be open to all those things that empower and enable our diplomats to sit down with the North Koreans, alongside with our South Korean partners, and move the ball forward to a negotiated settlement of the issues that we put on the table,” Esper said, declining to detail what specific kinds of options he might consider.

Asked whether he took Kim's year-end deadline seriously, Esper said: “I think that when any foreign country, foreign leader, says something, I take it seriously.”

Still, Esper stressed the need to maintain the readiness of the 28,500 U.S. troops deployed to South Korea. Pentagon officials say they have been able to preserve sufficient capabilities of U.S. and South Korean forces, despite scaling back the military drills.

Esper said such decisions are made in consultation with Seoul.

“As we consider adjusting – either dialing up or dialing down exercises and training … we want to do that in close collaboration with our Korean partners. Not as a concession to North Korea, or anything, but, again, as a means to keep the door open to diplomacy,” Esper said, without explicitly saying whether that was currently being considered.

Trump is pressing South Korea to take on a greater share of the cost of American military forces deployed there. A South Korean lawmaker said last week that U.S. officials demanded up to $5 billion a year, more than five times what Seoul agreed to pay this year under a one-year deal.

Asked if Washington was requesting a fivefold increase, Esper declined to comment but acknowledged the request was significant.

“I'm not going to speak to the number. Again, I don't want to get in front of the State Department on this. But we have asked for a significant increase in the cost sharing for our deployed troops,” Esper said, noting increased cost sharing was something the United States was seeking globally.

A survey by the government-affiliated Korea Institute for National Unification released last week showed 96% of South Koreans were against paying more for the U.S. military presence.