SecDef Esper: the Pentagon has no answer on preventing future military suicides

"You mourn for the families and for their shipmates," Esper said. "I wish I could tell you we have an answer to prevent future further suicides in the armed services. We don't." 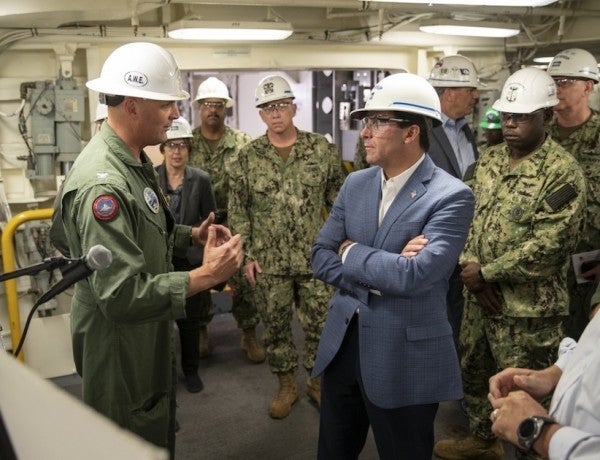 The military has the “means and resources” to stem the tide of suicide in its ranks, but continues to struggle in search of answers, Defense Secretary Mark Esper said Wednesday during a visit to Naval Station Norfolk.

Three sailors assigned to the Norfolk-based USS George H.W. Bush died of apparent suicide within days of each other in the past two weeks. The Navy said the suicides were not related, but it marked the third, fourth, and fifth crew member suicides in the past two years, said Capt. Sean Bailey, the ship's commander, who described himself as heartbroken.

Esper said he shares in the sailors' grief.

“You mourn for the families and for their shipmates,” Esper said. “I wish I could tell you we have an answer to prevent future further suicides in the armed services. We don't.”

The military is caught up in what some characterize as a national suicide epidemic, he said, and “it's something we continue to wrestle with.”

However, he thinks the military has the ability to get ahead of the problem, and he's committed to that goal.

Esper was on the final leg of a tour that began in North Carolina, where he discussed hurricane response and new technology at Marine Corps Air Station New River and Camp Lejeune.

In Norfolk, he wasted no time visiting one of the more star-crossed ships in the fleet: the submarine USS Boise. It has become emblematic of the Navy's failure to keep up with ship maintenance.

The Los Angeles-class submarine completed its last deployment in January 2015. It lost its dive certification in February 2017 while waiting for repairs at Naval Station Norfolk. The Navy finally outsourced the work to Newport News Shipbuilding, awarding the yard a $387.5 million contract.

The Newport News yard could not complete the job due to its own heavy workload. Earlier this year, Boise was sent back across the water to Norfolk — where it waits for repairs.

Esper said he spoke with Boise's commander and crew, plus crew members on the USS Gravely, a guided-missile destroyer that returned to Norfolk in August after a seven-month deployment.

Also on his radar is a ship that hasn't yet deployed: the aircraft carrier USS Harry S. Truman.

It remains sidelined by electrical issues, U.S. Naval Institute recently reported. Other ships in the Truman battle group have since deployed. Esper said any delay in ship maintenance creates a ripple effect throughout the fleet.

“We need to get ships in on time and get them out on time, and we need to better manage the demand coming from our combatant commands so we can stick to our maintenance schedules,” he said.

Later in the day, Esper visited Newport News Shipbuilding, where the Navy's newest carrier, the USS Gerald R. Ford, is undergoing post-shakedown work. The Ford had been scheduled to leave the yard this summer, but has been delayed as workers continue to troubleshoot its advanced weapons elevators.

According to a company news release, the secretary toured the Ford to see how work is progressing.

When it comes to overall fleet maintenance, Esper said he's very concerned that Congress will temporarily funding the federal government with a continuing resolution. The House has passed a CR to extend funding through Nov. 21. The Senate is scheduled to vote on it this week.

This would avert a government shutdown and allow work to continue toward a full budget. But it also would freeze spending at current levels and not allow new programs to start. Esper said a CR would have a “devastating” effect on military readiness.

“It's the biggest concern we have out there,” he said.

On a more positive note, Esper said he's confident that changes are coming to improve the condition of privatized military housing.

Poor conditions at contractor-operated housing at bases across the country grabbed headlines earlier this year after an investigation by Reuters and a survey by the Military Family Advisory Network. Sen. Mark R. Warner held two meetings in Hampton Roads where military families — most from the Navy — talked about problems like black mold.

Esper was the Army secretary at that time and noted “it hit the Army very hard.” But he said the services acted quickly, and he's seen a draft of a new tenants bill of rights that will give families a stronger voice.

“The challenge will be sustaining the pressure on providers,” he said, and “making sure culturally each of the services picks this up and understands that we have an important role in taking care of these families.”