SecDef: Moving military funds to the border wall is actually a good thing 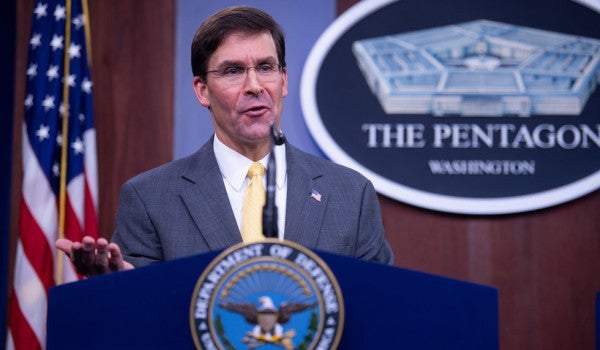 The plan, which siphons $77 million from four projects in Hampton Roads, drew strong protests from Democratic lawmakers. They say President Donald Trump is promoting his political agenda at the military's expense, that the wall is ineffective and that the move will hurt morale.

Esper defended the shift of funds. Once construction is complete, the Defense Department can redeploy personnel to “other high-traffic areas on the border without barriers. In short, these barriers will allow DoD to provide support to DHS (Department of Homeland Security) more efficiently and effectively,” he wrote in a memo.

In some cases, construction will result in a new wall. In others, it will replace existing, older barriers.

Half of the $3.6 billion will come from deferring projects in the United States and its territories. Puerto Rico is the biggest loser. About $400 million will be diverted toward the wall.

The other half will come from military construction projects outside the U.S. Those projects include replacing an elementary school in Germany and renovations to a school on Okinawa that lacks adequate fire suppression, Stars and Stripes reported.

Defense officials concede the diversion could result in delays.

In Hampton Roads, the Norfolk Naval Shipyard has two projects on the list. Naval Station Norfolk and Langley Air Force Base in Hampton each have one. Here is a breakdown of those projects, according to budget documents.

The Navy plans to renovate a building constructed in 1957 that has been cited for numerous safety violations. Those include lack of sprinklers, poor placement of fire alarms, no mass notification system and inadequate exits. Work is targeted on the fifth and sixth floors. Most personnel who work on those two floors have been moved to trailers.

The building requires roving fire watches around the clock, seven days a week, by current shop personnel, reducing their availability for ship maintenance and repair. Renovating the fifth and sixth floors would allow the nuclear containment and life raft shops to be moved from an existing building that would require even more repairs.

Funds diverted: $22.5 million for the shipyard warehouse, $18.5 million at the naval base.

These two projects under the Defense Logistics Agency have similar justifications. The current warehouses are World War II-era structures and not built for hazardous materials. They don't have adequate safety and fire-suppression systems or the needed storage capacity. Renovations won't solve the problem, the cost guidelines for replacing the building are less than what it would cost to refit the current building with new safety systems.

The Virginia Air National Guard 192nd Wing needs a specialized facility to operate its new 185th Cyberspace Operations Squadron. The Guard is considered a tenant at Langley; it doesn't have the authority to allocate space on the base. The 633rd Air Base Wing, which oversees the installation, doesn't have a site that would meet the Guard's requirements.

The Guard is currently leasing space outside the base.

“Continued use of that space is costly, and it involves an increased security risk, which is not appropriate to continue,” according to budget documents.