After a secret review of his fate, a military veteran charged with fatally shooting five people and wounding six others... 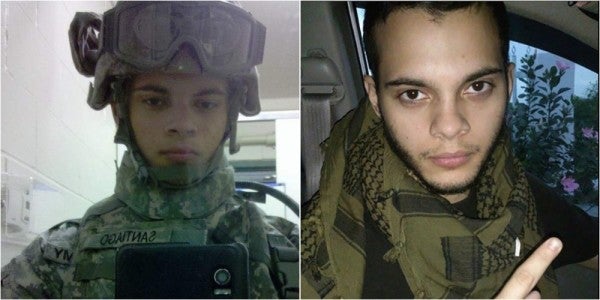 After a secret review of his fate, a military veteran charged with fatally shooting five people and wounding six others at the Fort Lauderdale airport last year will plead guilty in exchange for receiving a life sentence under an agreement disclosed Tuesday in Miami federal court.

Both prosecutors and defense lawyers said they reached the plea agreement as U.S. Attorney General Jeff Sessions weighed in on the death penalty question in the murder case of 28-year-old Esteban Santiago. Sessions, who had final say, received input from both sides in South Florida as well as a panel of experts at the Justice Department in Washington, D.C.

Prosecutors said Sessions signed off on the plea agreement, which was proposed by Santiago’s defense lawyers as a deadline loomed this week on the death penalty issue. They also said the shooting victims’ family members were also on board with the proposed life sentence.

“That was something taken into account in the attorney general’s decision” on whether to pursue the death penalty, Assistant U.S. Attorney Ricardo Del Toro said in court.

Santiago is accused of flying on a one-way ticket from Alaska to Fort Lauderdale-Hollywood International Airport in January of last year to carry out the shootings of mostly elderly travelers — one of three mass firearm killings in Florida since 2016.

Santiago, a former Army reservist who suffers from mental health problems, is expected to change his plea to guilty on May 23 after undergoing a psychiatric competency evaluation ordered by U.S. District Judge Beth Bloom. She said she wanted to be certain Santiago has the “capacity” to make the decision to plead guilty.

On Tuesday, Bloom asked the defendant if he discussed the plea agreement with his lawyers in the federal public defender’s office, and Santiago said: “Yes, your honor.” The judge also asked Santiago, who was wearing a ponytail and full beard, if he had any other questions, and he said: “No, your honor.”

One of his lawyers, Eric Cohen, told the judge that Santiago is “remorseful and willing to accept responsibility” for the mass shooting on Jan. 6, 2017.

While most murder cases unfold in state court, Santiago is charged federally because the mass shooting took place at an international airport. Federal authorities, unlike their counterparts in the state system, rarely pursue the death penalty, mainly because there are so few capital cases in the U.S. district court. And even when the Justice Department opts for death over life as punishment, an execution by lethal injection is extremely rare in the federal system.

Santiago, who grew up in Puerto Rico, packed his gun in a case that he had declared on the Anchorage-Fort Lauderdale flight, retrieved the weapon, loaded it in an airport bathroom and then calmly opened fire in a baggage claim area before encountering a Broward Sheriff’s Office deputy while exiting. He surrendered immediately.

Santiago’s mental health history, along with a stint in the Iraq War, played a significant factor in the attorney general’s decision on whether to seek the death penalty. Santiago was briefly hospitalized for psychiatric care in November 2016 — two months before the airport shooting — after he had gone to the FBI office in Anchorage and told agents that he was hearing voices urging him to support the Islamic State terrorist group and that the CIA was pressuring him to watch training videos. Agents referred Santiago to Anchorage police, who took his handgun from him while he underwent a psychiatric evaluation for a few days and then gave the firearm back to him that December.

Santiago is accused of using that same weapon, a Walther 9 mm, in the deadly attack at the airport. After Santiago surrendered, he told FBI agents in South Florida that he had been “programmed” by the government and also was inspired by the Islamic State extremist group.

However, FBI agents and prosecutors Del Toro and Lawrence LaVecchio said they found no actual links between Santiago and the Islamic State and therefore did not charge him with providing support to the terrorist organization in the 22-count indictment.

Ever since his arrest, Santiago has been taking medication to treat his diagnosis of schizophrenia. He has repeatedly told Bloom that he understands what is happening in his case, and his defense lawyers have said he is legally competent to stand trial.