New video shows the intense confrontation between rioters and Army vet Eugene Goodman, a lone police officer at the Capitol. 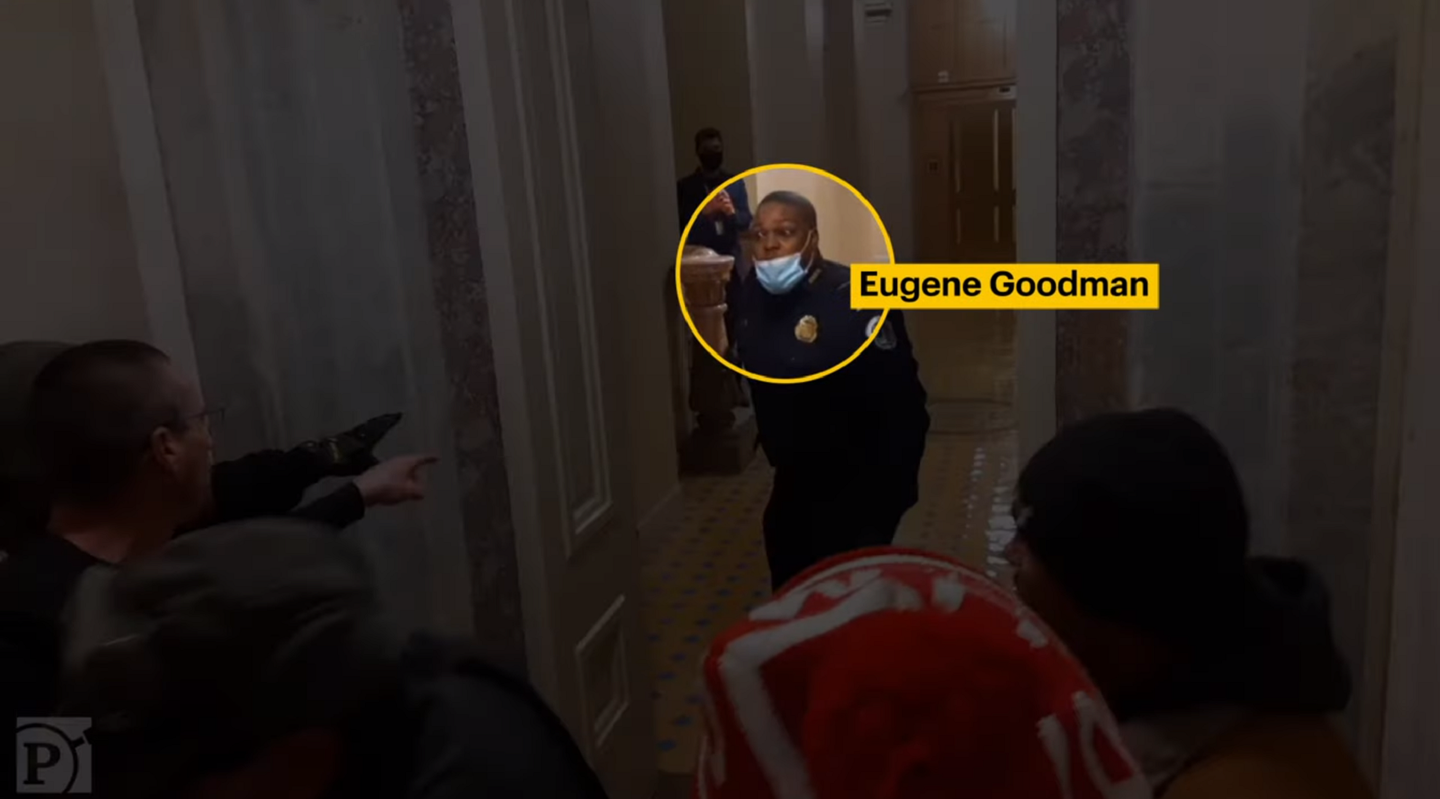 More than 10 million people have seen the video shot by HuffPost reporter Igor Bobic showing a Black Capitol Police officer leading pro-Trump rioters away from where senators were holed up in the Capitol on Jan. 6.

Now, ProPublica has uncovered new footage — amid a trove of content archived from the now-shuttered social platform Parler — that reveals the raw moments before Officer Eugene Goodman’s actions. The clip, recorded minutes after crowds breached a barrier outside, allows the public to see and hear new details from a turbulent day that ultimately led to President Donald Trump’s second impeachment.

As the just-under-two-minute recording begins and the door is opened, cheers are heard from crowds of demonstrators gathered outside. Once inside, the mob fans out, passing a Senate appointments desk and heading toward a bank of elevators.

Half of the video depicts the showdown between Goodman and the angry mob, and lets viewers see more clearly the size of the crowd and its rage. “Where they countin’ the votes?!” yells a man in the crowd repeatedly after rioters approach Goodman, who was blocking a corridor and stairs that lead to the Senate floor and other key offices.

Goodman had been guarding the entrance before demonstrators broke open a door moments earlier on the west side of the Capitol. After a loud crack, rioters are seen streaming into the building to the sound of glass breaking. Some chanted “U-S-A” as they sought out lawmakers.

The video also shows the brief, but tense, standoff with Goodman as he keeps his hand on his gun holster. Goodman — eyes wide and mask sliding below his face — continues trying to keep the crowd at bay. “Don’t do it!” someone shouts.

It soon became clear that Goodman was outnumbered. He turns and heads up the stairs he had been blocking moments earlier.

“Are you going to beat us all?” a man in the crowd says. Seconds later, the camera pans to the floor and cuts out.

The Justice Department said this week that at least 30 people have been charged for crimes committed at the Capitol.

A bipartisan group of lawmakers has introduced a bill to award Goodman the Congressional Gold Medal for luring the mob away from lawmakers. Goodman is a 40-year-old U.S. Army veteran and deployed with the 101st Airborne Division to Iraq for a year, The Washington Post reported.