After 18 months of Donald Trump’s “America First” presidency, European leaders meeting with him next week fear the United States... 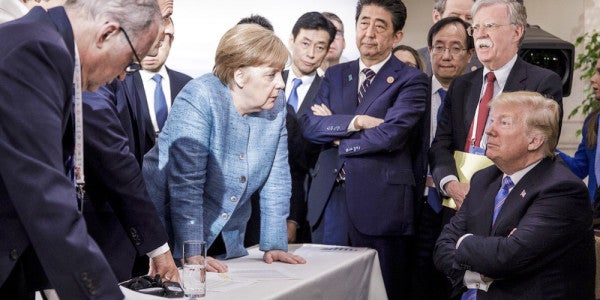 After 18 months of Donald Trump’s “America First” presidency, European leaders meeting with him next week fear the United States may change its traditional course and begin to bring American troops home from the continent.

It comes as nations, especially in Eastern Europe, are lobbying the United States to increase the number of troops on the continent as they worry about combating an increasingly aggressive Russia.

Trump has talked about bringing U.S. troops home from around the globe since he was on the campaign trail espousing a strategy he dubbed “America First” but he has yet to act.

“They are scared to death,” former Defense Secretary Leon Panetta told McClatchy. “They are worried about a very unpredictable president of the United States. They are increasingly worried he is going to do things not based on what’s in the best interest … but based solely on his vision of ‘America First.’ ”

The Pentagon is already reviewing the impact of withdrawing some of the 35,000 active-duty American troops in Germany, The Washington Post reported last month.

The fate of American troops in Europe is not expected to be on the agenda of the Brussels meeting of NATO — the alliance formed after World War II to counter a Soviet, now Russian, threat — but will loom large, as it comes just before Trump’s meeting with Russian President Vladimir Putin in Helsinki, Finland.

Some worry an unpredictable Trump, at the U.S.-Russia summit, could agree to take the first steps to embolden Russia, such as halting military exercises or agreeing that Crimea, a region of Ukraine annexed by Russia in 2014, belongs to Russia.

Magnus Nordenman, who worked as a defense analyst and a strategic planning consultant for major European defense industry companies, said European allies are “absolutely worried” after hearing Trump disparage allies of the G-7, as well as NATO members’ contributions and seeing him eager to meet Putin as well as North Korean dictator Kim Jong Un.

“There is element of uncertainty in all this,” said Nordenman, now the director of the Transatlantic Security Initiative at the Scowcroft Center for Strategy and Security at the Atlantic Council. “But we all need to take a bit of a breath here … and hope the president is in a good mood when he goes to Brussels.”

A senior administration official with knowledge of the situation but not authorized to speak publicly did not initially answer the question about possible troop withdrawals on a conference call with reporters. But when asked a second time, the official said Trump is not expected to threaten troop withdrawals in Germany or elsewhere.

Congress is likely to oppose troop withdrawals and could pass legislation to prevent Trump from using money to move the military.

Trump has criticized international alliances and organizations, even the United Nations, and European allies fear he is less committed to their security and NATO as previous U.S. presidents. Last month, he abruptly refused to sign a joint statement with the G-7, the world’s largest economies, following a meeting in Canada.

“At a time when the trans-Atlantic relationship between Europe and the U.S. is under a lot of pressure over disagreements on Iran and trade, NATO is really at the core of this relationship and will Trump — by basically criticizing the Europeans and conditioning American support — bring more disunity within the alliance,” said Erik Brattberg, director of the Carnegie Endowment’s Europe program who is in touch with a few diplomats who are concerned about Trump’s possible reduction of troops. “It would weaken the alliance and provide new opportunities for countries like Russia to take advantage of that.”

Related: US Troops Are Staying In Germany, The White House And Pentagon Say »

A third of active-duty U.S. military troops overseas — more than 60,000 — are stationed in Europe, including 35,000 in Germany, 12,000 in Italy, 8,500 in the United Kingdom and 3,300 in Spain, according to a Pew Research Center analysis of information from the Defense Manpower Data Center, a statistical arm of the Defense Department. Thousands more rotate into other European countries temporarily.

Many U.S. troops are there to do more than protect those countries. They are strategically located to help in other regions of the world, such as counter Iran or strike the ISIS.

The Trump administration has been supportive of NATO and European countries at a tactical level — actions generally credited to Defense Secretary Jim Mattis. It has sent more military equipment, participated in regional exercises, signed new defense agreements with Sweden and Finland and increased the number of Marines in Norway on a rotational basis by 350 and in Poland by a battalion.

Poland, Romania and the Baltic nations of Estonia, Latvia and Lithuania have been asking the U.S. for additional troops for several years. Poland is willing to spend up to $2 billion to lobby the U.S. to build a permanent military base there, according to a Defense Ministry proposal.

Related: Trump Marked A New Era In Security In Singapore — And Our Allies Know It »

“That’s the question: Is the U.S. security conditional?” asked Heather Conley, who served as a deputy assistant secretary of State in the Bureau for European and Eurasian Affairs for George W. Bush and is now a senior vice president at the Center for Strategic & International Studies.

In June, he sent letters to several allies complaining they are not abiding by a 2014 commitment to spend 2 percent of their gross domestic product on national defense. Kay Bailey Hutchison, U.S. ambassador to NATO, said this week that all 29 NATO members are increasing defense spending with 16 of them on track to meet the 2 percent goal.

The White House declined to say if and how Trump might punish the countries. “I’m not going to get ahead of any announcement or any action he could potentially take, but as you guys know, he’s shown some frustration there on the financial burden that the United States unfairly is forced to bear, and he wants changes,” White House spokesman Hogan Gidley told reporters this week.

In recent weeks, Trump suggested withdrawing more than 25,000 U.S. troops stationed in South Korea after trying to persuade Kim to rid his country of nuclear weapons.