Evidence Of People On Fort Bragg Land Dates Back More Than 14,000 Years

At first glance, the headstone looks like any of the others in Fort Bragg's Main Post Cemetery. But in row... 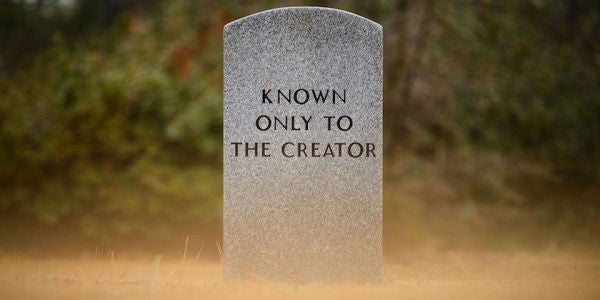 At first glance, the headstone looks like any of the others in Fort Bragg's Main Post Cemetery.

But in row after row of markers that resemble evenly spaced white teeth, this one is different.

There's no name. No dates mark the boundaries of a life. There's no military unit or religious emblem.

Instead, this marker is etched with five words: “Known only to the creator.”

In a cemetery as old as Fort Bragg itself, the marker is a nod to the area's prehistoric past and the people who lived, hunted, foraged and traded well before the Army brought artillery and parachutes to eastern North Carolina.

According to the Fort Bragg Cultural Resources Management Program, evidence of American Indians who lived in the area now covered by Fort Bragg dates back more than 14,000 years.

Today, teams are constantly surveying the land for evidence of those earliest inhabitants.

They also work to preserve the area's more recent history, including historic buildings and family cemeteries that predate Fort Bragg, which is set to celebrate its 100th anniversary next year.

Linda Carnes-McNaughton, a program archaeologist and curator for Fort Bragg cultural resources, said the installation preserves its own history as well as the history of all that came before the Army's arrival in eastern North Carolina.

“We can't stop there,” she said of Fort Bragg's own, relatively short history in the Sandhills. “People were here long before it was a federally owned land.”

Several prehistoric tools – including knife or spear ends known as Clovis points – have been found on Fort Bragg. They are among the oldest artifacts found so far.

Across Fort Bragg's more than 160,000 acres, officials also have found shards of pottery, caches of blanks for arrowheads likely brought to the region from elsewhere in the state and evidence of prehistoric campsites.

Carnes-McNaughton said those finds point to the land being overlaid by a trade network.

The small stones that would have been used to make arrowheads likely came from the state's slate belt, near what is now Chatham or Montgomery counties.

The pottery also indicates that the area's early inhabitants traveled and traded.

“The pottery we find, it's not made in China, and it's not made here,” she said. “People were moving through this landscape for thousands of years.”

There is no evidence there was ever a lasting prehistoric settlement on land that now encompasses Fort Bragg, Carnes-McNaughton said.

“There's no evidence of a town or a village,” she said.

Instead, the landscape was best used as seasonal hunting, foraging and fishing grounds, she said. And there is evidence of small seasonal camps.

It was one of those camps that was likely unveiled more than 15 years ago when N.C. 87 north of Fort Bragg was being widened.

On Fort Bragg land, the roadwork uncovered several artifacts. Among them were the only prehistoric human remains known to have been found on the military installation.

“It was the remains of a small individual,” Carnes-McNaughton said of the 2001 find.

Out of respect for the prehistoric people, she said the remains were never fully tested. So officials don't know much about who the person may have been.

Whoever the person was, he was likely cremated, Carnes-McNaughton said. The only surviving remains came from the hardest part of the body – tooth enamel – estimated to date to 5,000 B.C.

The discovery of the remains, coupled with requirements of a 1990 law known as the Native American Graves Protection and Repatriation Act, spurred a partnership with modern Indian tribes that would eventually lead to the unique headstone on Fort Bragg.

The NAGPRA requires consultations with federally recognized tribes following the discovery of remains.

Carnes-McNaughton said Fort Bragg reached out to numerous tribes with possible historical ties to the area. Of 20 tribes contacted by letter in 2005, about 10 replied and expressed interest in meeting with Fort Bragg leaders.

The next year, officials met on Fort Bragg, building relationships that continue today.

The current partnerships include representatives from the Catawba, Tuscarora, Muscogee Creek, Chickasaw and Shawnee tribes, as well as the Absentee Shawnee Tribal Town, Alabama-Quassarte Tribal Town, Thlopthlocco Tribal Town and the United Keetowah Band of Cherokee, according to Fort Bragg.

Once the relationships were developed, officials from Fort Bragg and the tribes eventually tackled the question of what to do with the remains that were found on Fort Bragg earlier that decade.

The remains had been kept wrapped in archival cloth, protected among the installation's many artifacts, Carnes-McNaughton said.

For most of 2007, officials went back and forth on where to rebury the remains.

Typically, officials would return them as close to where they were found as possible. But the widened highway made that impossible, she said.

Next, officials looked at sites that would be unlikely to be disturbed again – such as near the homes of one of Fort Bragg's endangered species.

Eventually, after touring several sites on Fort Bragg, one of the tribal leaders had a question.

“Where do you put your warriors?” he asked.

Fort Bragg officials said they weren't expecting that. They arranged a tour to the Main Post Cemetery.

Then, in a private ceremony in June 2008, the remains were buried in that cemetery, which houses soldiers, families and workers from across Fort Bragg's history.

Carnes-McNaughton said the remains were wrapped in a deer pelt.

A Catawba shaman performed the service, which Fort Bragg officials watched from across the cemetery, as only American Indians were allowed at the graveside service.

“It was really moving,” Carnes-McNaughton said.

Fort Bragg officials required the remains be marked with a headstone that met military regulations.

But with no knowledge of the person, the next question was what to put on the stone.

“It couldn't remain unmarked,” Carnes-McNaughton said. “So we chose to have it inscribed. We decided on 'Known only to the creator.'”