In the complaint, Texas-based attorney Colby Vokey says Navy SEAL Petty Officer 1st Class Eddie Gallagher is in breach of a contract he signed in October and Vokey is seeking $200,000 to $1 million in damages 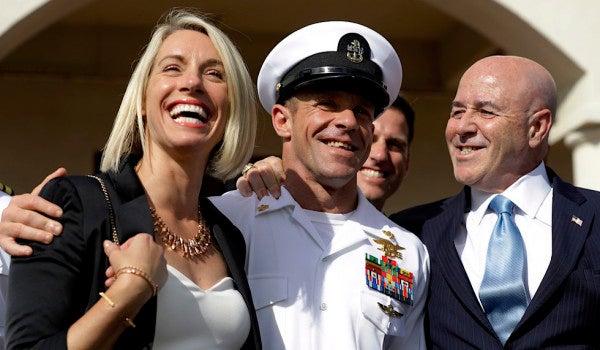 SAN DIEGO — A former attorney for a San Diego-based Navy SEAL acquitted of war crimes is trying to force his former client into arbitration to get paid, according to a complaint obtained by The San Diego Union-Tribune.

In the complaint, Texas-based attorney Colby Vokey says Navy SEAL Petty Officer 1st Class Eddie Gallagher is in breach of a contract he signed in October and Vokey is seeking $200,000 to $1 million in damages. In that contract, also obtained by the Union-Tribune as part of the complaint, Gallagher apparently agreed to go into arbitration should any attorney-client disputes emerge.

Parlatore called Vokey's move “grotesque” in comments to the Union-Tribune on Wednesday.

“The Gallagher family has been through hell, and it is grotesque that Colby Vokey has decided to go after them when the case isn't even over,” Parlatore said when reached by phone.

Gallagher is waiting on the Chief of Naval Operations, Adm. John Richardson, to finalize the case. Richardson can confirm, vacate or alter the sentenced imposed by a San Diego military jury in July.

Gallagher was found not guilty of the most serious charges against him, which included premeditated murder and shooting at civilians while in Iraq in 2017. He was found guilty of posing with the body of an Islamic State fighter, and he was sentenced to a reduction in rank and four months confinement, which Gallagher served before trial.

Richardson took over as convening authority in Gallagher's case last week. It is unknown when he might make a final decision in the case.

“In our hour of need, Colby Vokey and (nonprofit United American Patriots) came in and promised to give Eddie a top-notch legal defense with all expenses paid,” Andrea Gallagher said in the post. “Instead, they dragged the case out, focused more on using our family for fundraising while Colby ran up the bill, and made little to no progress in actually freeing Eddie.”

Vokey declined to comment when reached by phone Tuesday.

In the post, Andrea Gallagher said Vokey was “fired” after he “tried to push the trial out to November, we felt that he lied, threatened and extorted our family.”

“We believe if it were up to Colby Vokey, Eddie would still be in the brig with a trial in November or later,” she said in the post.

In addition to hiring Parlatore, the family also hired Marc Mukasey, who also serves as one of President Donald Trump's personal attorneys. Mukasey said Wednesday that because he and Parlatore don't normally practice in military court, they were able to deploy a more unrestrained defense.

“It was a really smart move, and a brave move, for Eddie, Andrea and Sean (Eddie Gallagher's brother) to ultimately go with lawyers from outside the system,” Mukasey said. “We were able to take a more aggressive approach, rattle cages that needed to be rattled and hold the government accountable.”

Although Vokey began representing Gallagher as early as the spring of 2018, any contract signed before October was not included in the complaint.

According to the October contract, Vokey and co-counsel Phillip Stackhouse were to be paid $400 per hour. However, it also says that Gallagher was approved for financial support through United American Patriots, a nonprofit that helps fund legal costs for service members.

“Client has applied for and been accepted for financial support from United American Patriots to cover attorney fees and case expenses,” the contract states.

Vokey is listed on UAP's website as a member of its advisory board.

In March, after Vokey's alleged firing, Andrea Gallagher announced on social media that her husband's defense would no longer raise money via UAP. She directed supporters to donate to the Navy SEALs Fund, another nonprofit that helps Navy SEAL families in need.

As of Wednesday, the Navy SEALs Fund has collected almost $750,000 in donations for Gallagher's case.

In an email to the Navy SEALs Fund obtained by the Union-Tribune, Vokey's attorney, Van Shaw, informed the fund about his efforts to obtain legal fees allegedly owed to Vokey and issued a lien notice to the nonprofit.

“This letter is a Notice of Lien and another claim for payment,” Van Shaw wrote in the email. “Please confirm you will pay the legal fees & expenses of my clients regarding Edward Gallagher. … If this Lien is not honored … I will take the necessary action to hold the Navy SEALs Fund responsible.”

Reached by phone Wednesday, Shaw suggested there was an agreement between the Navy SEALs Fund and Vokey, but declined to specify what it was.

Parlatore said he did not expect Vokey to move against the Navy SEALs Fund.

“Threatening the Navy SEALs Fund is not what anyone would expect from any professional attorney who values representing U.S. service members,” he said.

Parlatore said the Gallaghers were “stunned” by the arbitration demand.

“We are certainly going to fight this, and I expect at the end of the day, Mr. Vokey will end up owing Eddie Gallagher money,” Parlatore said. “When I took the case over, absolutely nothing Colby Vokey did in his first year representing Eddie Gallagher was of any help in moving this case forward. He performed no valuable services.”

The Navy SEALs Fund, United American Patriots, and Phillip Stackhouse did not immediately respond to requests for comment Wednesday.