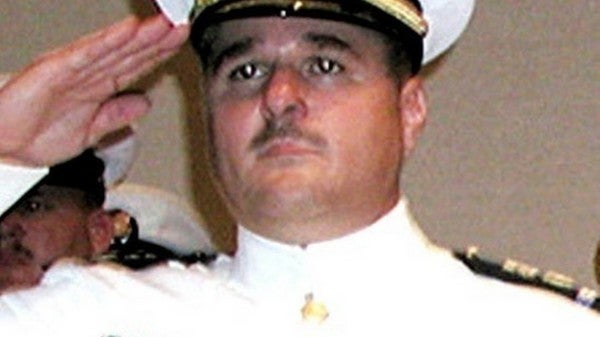 A Florida Keys jury Tuesday awarded a real estate developer more than $17 million in his civil case against a former Coast Guard base commander who was convicted of commissioning a 2012 hit on him.

The six-member jury agreed to the sum after Monroe County Chief Circuit Judge Mark Jones issued a default ruling against the ex-Coast Guardsman, Dennis Zecca, who is serving a 10-year prison sentence and did not show up for the civil trial in Key West. He did not send an attorney.

The decision comes a little more than a month after the real estate rep, Bruce Schmitt, reached a settlement valued at well over $1 million with the person he said put the plot together, rival businessman Ralph Lucignano.

At the time of the scheme, Lucignano owned a large liquor business and other financial interests in the Middle Keys city of Marathon that stood to suffer by the entrance of large retailers into the booze, wine and beer market, like Walgreens and Publix, which Schmitt, 70, represented.

He also didn't like Schmitt because he married a woman Lucignano once dated, according to Schmitt.

Schmitt said Lucignano arranged for Zecca, a former high-ranking Coast Guard warrant officer whose last assignment before retiring from the service in 2006 was commander of Station Islamorada, to have Schmitt killed in December 2012.

Lucignano, through his attorney, said last month that he had nothing to do with the plot, but he agreed to the settlement, which includes cash and real estate proceeds, because it would be cheaper than paying years of lawyers' fees. It would also be less time-consuming for Lucignano, who is in his 80s.

“I told him, 'You pay us, or you pay Schmitt,” attorney Joseph Klock said in a December interview. “And, if you pay us, you may not get rid of Schmitt.”

Zecca was part owner of the Marathon Boatyard and Marina at the time of the plot. According to federal court documents, he offered one of his employees his choice of either $20,000 in cash or a kilogram of cocaine to do the job.

But that employee turned out to be a cooperating informant with the U.S. Drug Enforcement Administration in the agency's cocaine smuggling investigation into Zecca. He told his DEA handlers about the plot, and agents passed the information on to the FBI.

The FBI told Schmitt, and they staged a shooting scene, photographing him in a pool of fake blood. Agents then told Schmitt to leave the country if he could because there were an unknown number of people in Marathon who wanted him dead over these liquor license disputes. He spent much of 2013 in Costa Rica.

The informant, who was wearing a wire, drove to the marina to show Zecca a photo of the supposedly dead Schmitt. According to transcripts of the recorded conversation, Zecca told him he had to drive somewhere to get $5,000 of the money he owed the informant.

When the informant asked who had the cash, Zecca responded: “I gotta go to Ralph's people.”

When Zecca pulled out of the parking lot in his car, FBI agents arrested him. And, in a development that still angers Schmitt and law enforcement agents working on the case, prosecutors with the U.S. Attorney's Office never pursued who else other than Zecca was involved in the plot.

The FBI didn't release the unredacted conversation that mentions “Ralph's people” until 2018.

Zecca was convicted in 2014 on attempted murder-for-hire, to which he pleaded guilty. A judge sentenced him to the maximum penalty under federal guidelines — 10 years. He faced an additional life sentence for cocaine smuggling, but prosecutors dropped that charge after his guilty plea for trying to have Schmitt killed.

Prosecutors haven't commented on the case since, so it's unclear what they received in return for the attempted murder plea except avoiding a lengthy trial.

The jury Tuesday awarded Schmitt $1.1 million for lost wages and medical expenses, $1 million for pain and suffering and $15 million in punitive damages against Zecca.

Even though the likelihood of Schmitt getting $17 million from Zecca when he's released from prison is unlikely, he said Tuesday he feels the jury delivered justice.

“It sends a message to the people of Marathon that what happened to me should not happen to anybody,” Schmitt said.

His attorney, Jason Kellogg, acknowledged that Schmitt collecting the entire award is not realistic, but said when Zecca, now 58, gets out of prison, he'll likely get a job and his wages will be garnished. Schmitt may also be entitled to some of Zecca's private property.

But, like his client, Kellogg said the judgment gets Schmitt and the community closer to the truth.

“This validates what he's been telling people for years. He hasn't been tilting at windmills. This happened to him,” Kellogg said.

Kellogg also said he and Schmitt hold a little hope that Zecca may tell the whole story when he's released. If he does, he won't face any more criminal repercussions. The statute of limitations in Florida for attempted murder-for-hire is four years.

“Maybe, he'll trade in the judgment for the truth,” Kellogg said. “Maybe he'll finally say what happened and who put him up to this.”