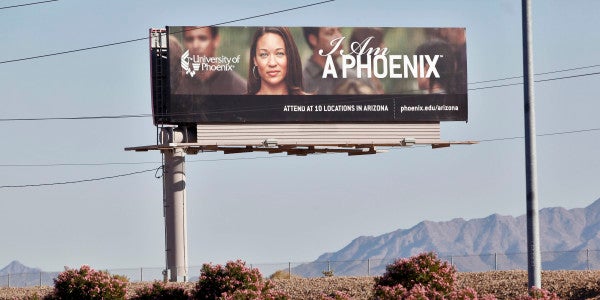 A new report from Aaron Glantz at the Center of Investigative Reporting reveals how the University of Phoenix has flouted a 2012 executive order by President Barack Obama intended to stop for-profit schools from having disproportionate access to military bases.

The Post-9/11 G.I. Bill has been an absolute cash cow for the University of Phoenix and other for-profit colleges. Many of Phoenix's campuses have a higher student loan default rate than graduation rate, while the school has taken in $1.2 billion in federal funds since 2009.

And yet, in spite of Obama’s executive order, Glantz’ report reveals a comprehensive and morally and legally dubious effort by the University of Phoenix to connect with service members and veterans by sponsoring concerts and other events on military bases, attending veteran-specific job fairs, unrolling robust marketing campaigns, and even evoking the seals of the military branches on a University of Phoenix challenge coin.