More than 7,000 troops from 24 nations are participating in a massive exercise in Jordan, training to combat improvised explosive... 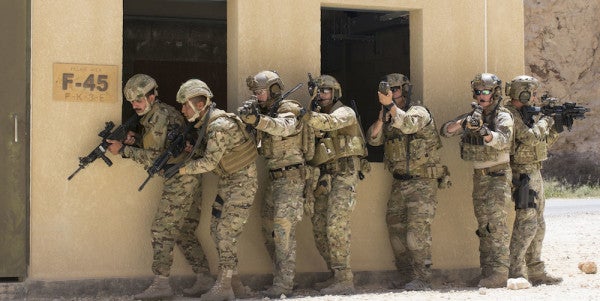 More than 7,000 troops from 24 nations are participating in a massive exercise in Jordan, training to combat improvised explosive devices, cyberattacks and other threats.

Exercise Eager Lion, which runs from May 7 to 18, is hosted by the Jordanian armed forces in partnership with the U.S. military. It is the largest annual exercise in the Middle East in which the United States participates.

“It is an opportunity to train together to prepare for future contingency operations,” said Maj. Gen. William Hickman, U.S. Army Central deputy commanding general. “Jordan is a great host. They are very supportive of the U.S. military and our needs. There is a very special relationship between the two countries, and it all comes together once a year.”

The training covers a wide variety of military doctrine, including cyberattacks, chemical warfare and mass-casualty simulation. Many of these training scenarios include dealing with improvised explosive devices.

This type of training is seen as increasingly important because of fears that the Islamic State, which is steadily losing territory in Syria and Iraq, could increase its attacks in neighboring countries.

Though the training is against a notional enemy, Hickman said, it incorporates the threats of ISIS and other terrorist organizations in the region.

“It will help our soldiers operate against an ISIS-type threat or other terrorist threat with their current capabilities and projected capabilities over the next several years,” he said.

The 11-day drills force participants to operate in an austere environment in the Jordanian desert. Troops are challenged at every level.

The largest forces participating in the exercise this year are from the United States, Jordan, Belgium and Italy.

“It definitely strengthens the bond and understanding of the different ways we operate,” Hickman said. “The current threat goes across many different regions. Not just CENTCOM, but (Europe), Africa and many different areas. The threat does not stop at nation boundaries.”