The Air Force Must Embrace The Suck Ahead Of The Next Big War, Goldfein Says

The Air Force needs to train to deploy to austere forward bases instead of established installations with mature infrastructure, the... 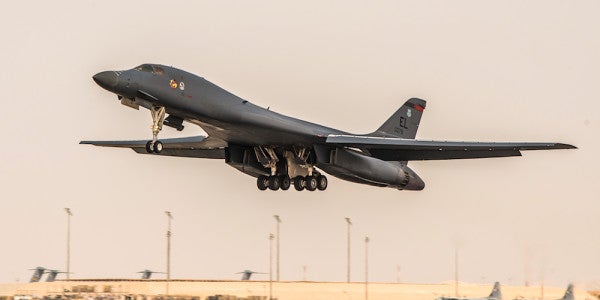 The Air Force needs to train to deploy to austere forward bases instead of established installations with mature infrastructure, the service’s chief of staff said on Tuesday.

“Make no mistake: From Bagram to Al Udeid, to Kunsan and Osan, we know how to defend an establish base, receive follow-on forces, and take the fight to the enemy,” Gen. David Goldfein said at the Air Force Association's annual conference in National Harbor, Maryland. “That muscle is regularly exercised and is in excellent condition.

“However, the next fight – the one we must prepare for as laid out in the National Defense Strategy – may not have fixed bases, infrastructure, and established command and control, with leaders already forward, ready to receive follow-on forces,” Goldfein said. “It’s time to return to our expeditionary roots.”

The National Defense Strategy calls for the military preparing to fight near-peer conventional adversaries, such as Russia and China, which tout cruise missiles and other long-range weapons that can destroy fixed air bases from afar. Future enemies will also likely be able to jam U.S. communications and navigation satellites and put U.S. troops under both cyber and electromagnetic attack.

To meet these challenges, the Air Force plans to add 74 new squadrons by 2030 – a 24% increase in the number of operational squadrons. The 386 squadrons would form “the boxer’s fist,” Goldfein said on Tuesday.

“But in addition to preparing portions of their squadrons to deploy forward into a mature base, our operational squadron commanders must be prepared to take their entire organization and the supporting elements – the body behind the fist – forward to establish and lead expeditionary operations at a new base,” Goldfein said. “And they must be trained and ready to reach back to supporting organizations – the body – who enable their operations. And we have to be prepared to execute on combatant commander timelines as the service expected to arrive in days versus weeks or months.”

Related: The Air Force Is Planning A Massive Expansion To Take On Russia And China »

The Air Force’s major command’s leaders will work to update and adopt the service’s plans for supporting expeditionary operations, which was originally established in the late 1990s – before the Global War on Terror, he said.

“Over time, we’ve migrated away from the original design of the expeditionary Air Force from a force organized to deploy forward, establish new bases, defend those bases, receive follow-on forces, establish C2 , fight the base, and operate while under attack — to a force that often cannibalizes itself to send forward sometimes individual airmen from every wing of the Air Force to join a mature campaign with established leadership, basing, and C2 infrastructure.”

Squadrons must be organized on an expeditionary wing structure so that they can rapidly join joint task forces and instantly conduct combat operations in air, space, and cyberspace, Goldfein said. That also means that security forces airmen must be “the best in the world” at defending Air Force bases.

“We must always take integrated and layered base defense to a new level by increasing investment in our defenders with new equipment, new training, new tactics, techniques, and procedures, and renewed focus at every echelon of command,” he added. “This is the year of the defender because we don’t project power without the network of bases and infrastructure needed to execute multi-domain operations.”