Out of all the events of the recent five-day Expert Soldier Badge (ESB) testing at Joint Base Langley-Eustis in Virginia, navigating with a map and compass and the current Army Physical Fitness Test (APFT) accounted for most ejections 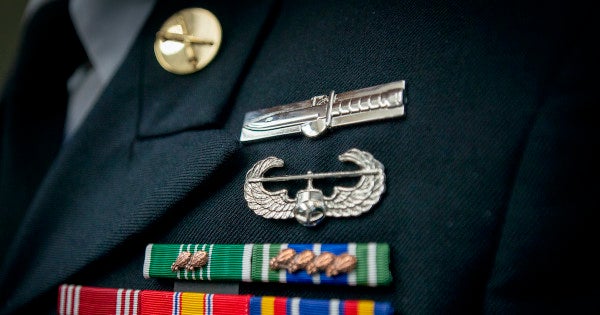 JOINT BASE LANGLEY-EUSTIS, Virginia — Out of all the events of the recent five-day Expert Soldier Badge (ESB) testing here, navigating with a map and compass and the current Army Physical Fitness Test (APFT) accounted for most ejections.

Of the 95 soldiers that began the first day of testing on Sunday, 26 failed the day land navigation test and seven no-goed on the night land nav course. On the same day, 26 soldiers failed to meet the ESB standard on the APFT — for a total of 59 dropped from testing.

“I hate to say this, but we lost 64% … for just and land navigation alone — 64%,” said Command Sgt. Maj. Edward Mitchell, CSM for the Center for Initial Military Training (CIMT).

This was the Army's second round of testing for the new ESB, which became effective Oct. 1. Nine female and 86 male soldiers from non-infantry military occupational specialties from active, National Guard and Reserve units tested, but only three male soldiers were awarded the new skill badge, which is intended to be equivalent to the venerable Expert Infantry Badge and Expert Field Medical Badge tests.

The first ESB testing occurred in October at Joint Base Lewis-McChord, Washington. Out of the 208 soldiers who tested, 68 were awarded the ESB.

The dramatic difference in results between the two tests surprised the leadership of the CIMT, the proponent for the ESB program.

“I was worried after land nav. I'm like, 'We lost how many after land nav? Really?'” Maj. Gen. Lonnie Hibbard, commander of the CIMT, told Military.com.

In many cases, it came down to soldiers being “OK with the minimum” on the day land navigation test, which required soldiers to find three out of four points, Hibbard said.

“There were some that only did three out of four points — 'I don't need to do the fourth one,'” he explained. “Well, when they didn't get the right point, they were now a no-go because they didn't want to do all four.”

This may have been the reason 26 soldiers couldn't meet the ESB standard for the APFT, which earns 80 points each for push-ups, sit-ups and two-mile run for a total of 240 points, said Command Sgt. Maj. Timothy Guden, the CSM for Training and Doctrine Command.

The minimum passing score for the APFT is 180 points.

“I have seen and heard soldiers talk about, 'Well, I passed. I got 180. I'm good,' and they are OK with that,” Guden said, warning that the attitude will give many soldiers trouble when the more challenging Army Combat Fitness Test becomes the test of record in October 2020.

Spc. Jesse Johnston said he was stunned when he no-goed on the APFT. The military police soldier with the 3rd U.S. Infantry Regiment (The Old Guard) at Fort Myer, Virginia, said he scored 80 points on the push-ups, but only got to 63 sit-ups at the end of two minutes when he needed 66.

“I took it for granted; we do plenty of PT at my company. … That was one of the small things on my mind,” he told Military.com. “It's just demoralizing coming out here and being dropped on something that was … the least of my concerns. … If I come here, I expect to do good at whatever I am doing. I just don't go somewhere and be like, 'Oh, whatever.'”

Johnston said he isn't done with the ESB.

In addition to the APFT and land navigation, the ESB also tests soldiers on their knowledge of 30 warrior tasks and battle drills out of the “Soldier's Manual of Common Tasks.” The three test lanes feature 10 events each that focus on patrolling, medical and weapons skills.

Tasks ranged from providing first aid to a casualty under fire and moving the casualty to safety, employing hand grenades and performing tasks involving every weapon from the M4A1 carbine to the M2 .50 caliber machine gun.

Depending on the post, the commander can set up to five ESB tasks specific to a particular military occupational specialty. The test at Langley-Eustis required soldiers to perform the following:

Of the 35 soldiers who started the skill lanes on Monday, 27 no-goed out by the end of the day. Five of the eight soldiers who began testing Tuesday were eliminated by that afternoon.

During each of the test lanes, candidates can re-test on one no-go per lane per day. If they fail the retest or another event, they are dropped from the test.

Guden acknowledged that the results of this ESB testing were “a little bit below the norm, but that is kind of like the norm when it comes to the percentage of issuance of EFMBs and EIBs.”

“Some of you may think, 'Wow, that is mind-blowing … it was too hard or they increased the standards or something,'” Guden said to soldiers after the testing. “They just made sure that the standards were adhered to. We are not creating anything new. These are Army standards.”

That standard, Mitchell stressed, comes out of the “Soldier Manual of Common Tasks” rather than standard operating procedures or tactics, techniques and procedures often developed by units.

“It's not no SOPs; it's not TTPs that you have in your organization — it's doctrine,” he said.

Mitchell did say that the 2nd Stryker Brigade Combat Team, 2nd Infantry Division, conducted both ESB testing and EIB testing at the same time at JBLM, a difference that may have factored into a higher number of ESBs awarded.

“They work hand-in-hand with their infantry brethren,” he said. “It was more intense training for them because that's all they had to gear to. We've got all three components here.”

Before testing began, candidates were given five days at Langley-Eustis to practice land navigation and familiarize themselves with the tasks on each test lane.

That's not enough training, said Command Sgt. Maj. Brandon Knicely, CSM for the Leader Training Brigade, which is attached to the CIMT but located in Fort Jackson, South Carolina.

“A commander should dedicate 120 days out or plus to be able to train on ESB tasks … just to be able to prepare a soldier to actually come here and be an expert at it,” he said. “It's going to take us time to evolve to where our leaders have now come through it … and go back to their units and create a training plan.”

Knicely still remembers when he earned his EIB in 1998 and how close he came to failing the test on the first day of skill testing.

The young private first class was a little overconfident on his grenade throwing and felt no need to do practice throws.

“I went right up to the station and I said, 'I'm throwing them right now,'” Knicely said. I no-goed.”

“My squad leader got on me and said, 'Knicely, what are you doing? Slow down. You are overconfident. You're going too fast. Slow down.'

“I needed that squad leader to tell me that,” he said. “I slowed down, I did one station at a time, I didn't let my arrogance get to me, and I got my EIB as a private first class in Korea. I am very proud of that.”