Why Didn’t Those F-15s Shoot Down That Stolen Commercial Airliner In Seattle? 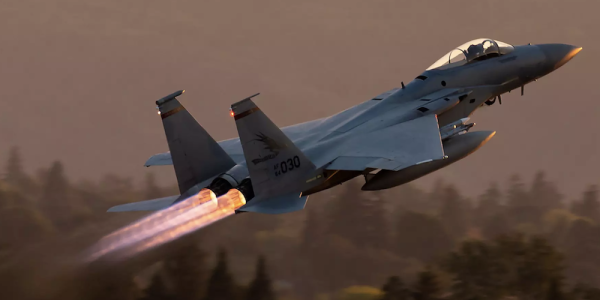 “We cannot speculate the various considerations and decision-making processes that led to the decision to not shoot, but can confirm that they did not,” Air Force Capt. Cameron Hillier, a NORAD spokesman, told Military.com on Wednesday. “While the fighters are armed during intercept missions as part of Operation Noble Eagle, the F-15 has a wide range of response options available, depending on the circumstances. They could shadow, intercept, escort or provide aid as required.”

Hillier said officials at NORAD, the Air Force's air operations center, and officials “at many levels,” including the Office of the Secretary of Defense, monitored the situation as it unfolded Friday evening.

“Through it all, there was a call not to take the shot,” he said. An after-action report is in the works but will not be made public as it is classified, he added.

The fighters “were directed to fly supersonic to expedite the intercept,” NORAD said in a statement following the incident. The pilots attempted to redirect the aircraft over the Pacific Ocean, it added.

The ideal resolution would have been for Russell to land the Q400 at a remote location, Hillier said. “Effort one was to get him on the ground, but the pilot gets a vote in that.”

NORAD said that while the situation at Sea-Tac was “unique,” it is tasked with monitoring many intercepts every year as part of Operation Noble Eagle, the operation name for all air sovereignty and defense missions in North America.

“NORAD has conducted more than 1,800 intercepts of non-military aircraft since September 11, 2001,” Hillier said. “While the majority of intercepts are conducted in the United States, NORAD focuses on the defense of both the U.S. and Canada and draws on forces from both countries as mission requirements dictate.”