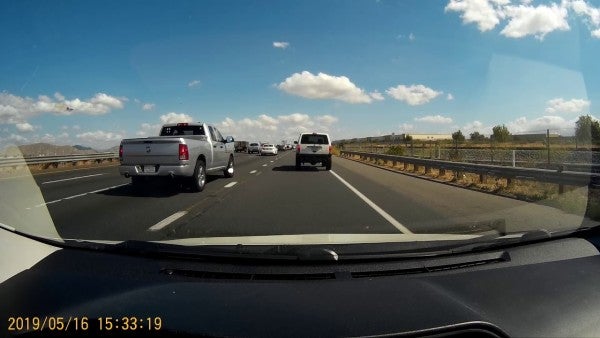 Dashcam footage from a freeway commuter shows the moment a pilot ejected from an F-16 military jet last week, releasing a parachute before the aircraft slammed into a Riverside County, California warehouse.

The pilot had reported hydraulic problems with the single-engine Fighting Falcon before bailing. The pilot, who has not been publicly identified, planned to return to the March Air Reserve Base on the other side of the freeway, but was instead forced to eject from the aircraft.

After ejecting from the jet and deploying a parachute, the pilot landed safely in a nearby field. The unmanned jet then crashed into the See Water Inc. warehouse, west of the airfield and adjacent to the 215 Freeway and Metrolink train tracks between the Moreno Valley/March Field and downtown Perris stations.

The footage, shot by YouTube user James Dyer from the 215 Freeway near the Van Buren Boulevard exit, focuses on the road ahead as traffic moves along steadily. The jet appears suddenly in the upper-left frame, plummeting downward. A burst of smoke appears as the pilot ejects, and the plane glides at a distance into the center of the frame. Traffic slows, then comes to a stop.

A person inside the building when the jet crashed recorded the immediate aftermath and posted the footage on Facebook.

“Holy … dude. That's a … airplane; that's a military airplane in our building,” he said.

The crash ruptured the building's sprinkler system. In the midst of the debris, water can be seen pouring from the roof.

"That's a military airplane in our building!" New video shows the damage inside a warehouse after a F-16 Fighting Falcon carrying ammunition crashed into the building just west of March Air Reserve Base in Moreno Valley. Credit: Jedd Schoffstall https://t.co/NJ8p1JykuZ pic.twitter.com/Ggn36gy6qi

The jet was flying with a standard armament package. The area around the crash and several nearby businesses were closed, and once secured, the ordnance was detonated in a nearby field.

No one was seriously injured in the crash. Ten people were treated in an emergency room and three others were taken to a hospital with injuries that did not appear to be life-threatening. The pilot was taken to a hospital and released in good condition.

According to the U.S. Air Force, the jet was assigned to the 114th Fighter Wing in Sioux Falls, S.D. It was on a training mission for North American Aerospace Defense Command at the time of the crash.

WATCH NEXT: That Time An Air Force Colonel Flew An F-16 To A Pentagon Booty Call