This F-22 Raptor Was Grounded After Being Invaded By 20,000 Honey Bees

192nd Fighter Wing Aircraft Maintainers were bemused when they found a swarm of honey bees hanging from the exhaust nozzle... 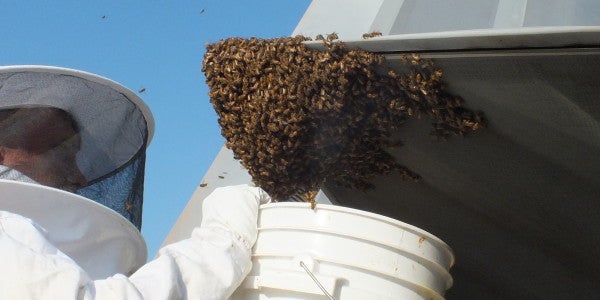 192nd Fighter Wing Aircraft Maintainers were bemused when they found a swarm of honey bees hanging from the exhaust nozzle of an F-22 Raptor engine following flight operations at Joint Base Langley-Eustis, Virginia on June 11, 2016.

Initially, everyone's reaction was to run and find someone who could “get rid” of the bees, but Tech. Sgt. Jeffrey Baskin, 192nd Maintenance Squadron crew chief, knew that these honey bees were too important to exterminate.

“I was shocked like everyone else because it looked like a cloud of thousands of bees, but I knew they wouldn't sting anyone and were just looking for a new place to live,” said Baskin. “My neighbor maintains two colonies of honey bees and I knew they were at risk for extinction, I figured we might want to get a honey bee expert out to collect them.”

Maintainers notified Capt. Katie Chiarantona, 192nd Aircraft Maintenance Officer about the honey bee swarm. Since this had never happened on the flight line before, Chiarantona initially called the on-base entomologist to assess the situation. The entomologist immediately knew that he did not have the means to relocate the bees, so he referred Chiarantona to a local honey beekeeper in Hampton, Virginia.

Andy Westrich, U.S. Navy retired and local bee keeper, arrived on base with the needed materials and supplies. According to Chiarantona, Westrich said the swarm was one of the largest he had ever seen. He was escorted to the aircraft and used vacuum hoses to safely corral the honey bees off of the aircraft into large buckets. He then took the bee's home and found that, as a hive, they weighed eight pounds which calculates to almost 20,000 bees!

“The honey bees most likely came from a much larger bee hive somewhere else on base,” said Chief Master Sergeant Gregg Allen, 192nd Maintenance Group Quality Assurance chief, who also happens to be a beekeeper. “Bee hives are constantly growing and they eventually become overcrowded. Around springtime, the bees will make a new queen, scout for a new location and take half of the hive with them to that location.”

Westrich suspected that the swarm of bees were on their way to a new location to build a hive for their queen. Queen bees typically fly with eggs to lay at the new hive and do not eat for up to 10 days before leaving to start a new colony. As a result, the queen is often malnourished for the journey. Westrich believes she landed on the F-22 to rest. Honey bees do not leave the queen, so they swarmed around the F-22 and eventually landed there.

According to Chiarantona, “[Westrich] said that one out of two things could have happened, the queen would have rested and gained energy and the swarm would've left in the morning, or they would have decided that the jet engine would be a great place to build a hive.”

Westrich was able to safely relocate the colony to a local beer producer where they will maintain the honey bee colony and use the honey for their production facility.

“Every bee is important to our food source; lots of things would die without bees,” said Baskin. “Most of our crops depend on bees, and our bees need to pollinate. This is why I knew we needed to save them instead of them.”