The number of American bombs dropped in Afghanistan this year is projected to be triple the total dropped in 2016, … Continued 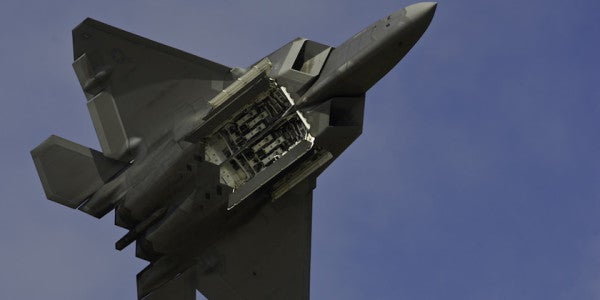 The number of American bombs dropped in Afghanistan this year is projected to be triple the total dropped in 2016, NBC reported on Nov. 20, indicating that U.S. military commanders are taking full advantage of expanded authorities in the country as they ramp up efforts to degrade an emboldened Taliban.

The U.S. military unloaded 3,554 munitions against enemy targets in Afghanistan as of Oct. 31. That’s a whole lot of ordnance. 1,337 American bombs were dropped in Afghanistan in 2016, exceeding the previous year’s total of 947.

The NBC report coincided with the Afghan war debut of the fearsome F-22 Raptor, which took part in a massive joint air operation — called Operation Jagged Knife — to eradicate opium production facilities in Helmand Province on Nov. 19. Alongside Afghan A-29s and U.S. B-52s, the F-22s pummeled the countryside with 250-pound small diameter bombs, Military Times reports. A total of 10 facilities were destroyed on the first day of the operation.

Naturally, civilian casualties from airstrikes — both American and Afghan — have also risen dramatically, jumping 50% over the last year. 205 civilians were killed by airstrikes in Afghanistan between Jan. 1 and the end of September. The majority died as a result of bombs dropped by the Afghan air force, while 38% of the deaths were attributed to international military forces, according to Reuters.

When President Donald Trump announced his new Afghan war strategy in August, he vowed to “lift restrictions” on deployed troops, whose presence in Afghanistan has been steadily growing ever since. “We are not nation building again. We are killing terrorists,” Trump declared. “We will also expand authorities for American armed forces to target terrorist and criminal networks that sow violence and chaos throughout Afghanistan.”

The official number of U.S. service members in the country is expected to reach almost 16,000 in 2018, which would nearly double the number on the ground when Trump took office in January. The actual numbers are higher than what is reported, as the Pentagon doesn’t include certain personnel in the count.

President Barack Obama attempted his own surge in Afghanistan beginning in late 2009, which brought the total number of U.S. troops to a record high of 100,000 for an 18-month window to beat back a resurgent Taliban before a withdrawal commenced. That effort cost a lot of American and Afghan lives but failed to make the country anymore stable. The Taliban flooded the void left by foreign troops when the NATO combat mission formally ended in 2014 and now, according to Long War Journal editor Bill Roggio, controls about 40% of Afghanistan.

A key pillar of the Pentagon’s latest campaign in Afghanistan is the demolition of insurgent revenue streams — hence Operation Jagged Strike. Opium production in Afghanistan has increased 87% since 2016, and this year’s crop was the largest since the War on Terror kicked off in 2001, according to the U.N. Office of Drug and Crime.

“We hit the labs where they turn poppy into heroin,” Gen. John Nicholson, commander of U.S. forces in Afghanistan, told reporters in Kabul on Nov. 20. “We hit their storage facilities where they keep their final product, where they stockpile their money and their command and control.”

Operation Jagged Strike is a clear example of how the U.S. military intends to take advantage of their expanded authorities. Between the end of the NATO combat mission in 2015 and August of this year, U.S. forces were only allowed to launch strikes against enemy targets in self-defense. Now, thanks to Defense Secretary Jim Mattis’ recent adjustment to the so-called “proximity requirements” for airstrikes, troops can take the fight to the enemy. And take it they have.

Nicholson sees victory on the near horizon. He set a goal of bringing 80% of the Afghan population under the control of the U.S.-back government within two years. That, he said, would “drive the enemy to irrelevance.”

On Nov. 20, however, Nicholson did acknowledge that turning the 16-year war around with only a tiny fraction of the troops deployed to Afghanistan amid the previous attempt will not be a total walk in the park.

“We are bracing ourselves for a difficult few months or perhaps year,” he said.